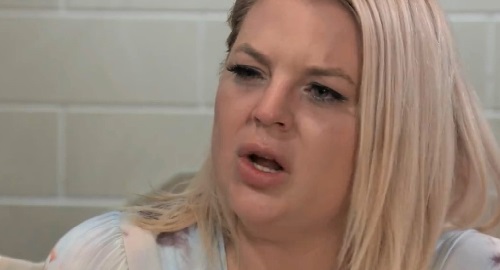 General Hospital (GH) spoilers tease that Maxie Jones (Kirsten Storms) will blast Peter August (Wes Ramsey) behind bars, so accusations and threats will fly when these exes finally meet again. Both Maxie and Peter will have some important things to say to each other, so let’s discuss all the drama.

GH viewers know Maxie was rattled when Peter used his one phone call to reach out. Peter insisted he was coming home and acted like they’d be together soon, but Maxie obviously has no interest in reuniting with her deranged ex-fiancé.

In fact, part of Maxie would prefer to never see Peter again, but another part of her will no doubt need closure. Maxie has been terrified of Peter for so long that she doesn’t trust anything or anyone at this point. Peter has given the cops and the WSB the slip too many times for Maxie to get lulled into a false sense of security.

Maxie will be even more concerned once Peter is back in Port Charles since he’ll be so close to Louise August (Harper and Scarlett Bloom). Peter is a crafty character who consistently wiggles out of tight spots, so there’ll be some fears about his escape.

Even so, Maxie will be extra careful once she accepts the meeting Peter will inevitably demand. Although facing Peter certainly won’t be something Maxie looks forward to, at least she’ll be able to see with her own eyes that Peter’s been captured.

Peter will likely remain in a jail cell when Maxie comes to see him, so Maxie should feel fairly secure – at least for the length of this conversation. Maxie will still worry Peter might somehow break out and go after “Bailey” if he figures out she’s actually Louise, but Anna Devane (Finola Hughes) may assure Maxie that Peter’s not going anywhere.

General Hospital spoilers say Maxie will finally stare down her past on December 7, which should mean staring into Peter’s cruel eyes. Maxie will no doubt lash out over everything Peter’s put her through and act like it’s his own fault that Louise is missing.

As for Peter, he’ll refuse to give up on getting his daughter back. Peter might hold out hope for a reunion with Maxie and may vow to find a way for his family to be together. It’s possible Peter will even start to suspect Maxie knows where Louise is and is holding out on him.

GH fans can expect some accusations and threats to be hurled during Maxie’s showdown with Peter. That could lead to clues and more trouble if Maxie doesn’t watch it! We’ll keep you posted as other news and updates emerge.

General Hospital spoilers say Peter will remain in custody for now, but it could spark a disaster if Peter makes yet another quick getaway! CDL will have lots of other exciting soap spoilers, updates and news to read up on, so stop by frequently.