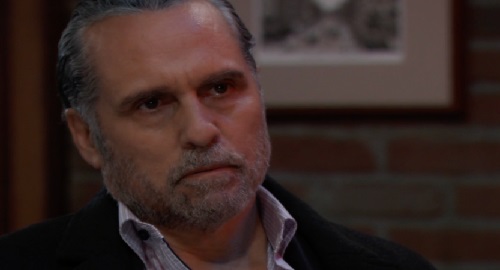 During the week of November 29-December 3, Brook Lynn Quartermaine (Amanda Setton) will struggle as she faces more backlash and tries to shield Harrison Chase (Josh Swickard). Chase is doing a good deed by helping to protect “Bailey Quartermaine” aka Louise August (Harper and Scarlett Bloom), so she won’t want to make this harder on him than necessary.

Valentin Cassadine (James Patrick Stuart) will remain livid over Brook Lynn’s “baby daddy” lie, so he’ll crash the Quartermaine gathering to reveal that his previous deal with Brook Lynn is a thing of the past. Thanks to some legal maneuvering, Valentin was able to undo his agreement and regain control of Brook Lynn’s shares.

However, Drew will show up to give everyone a shock at the Q manse soon enough. After Drew fills Sam McCall (Kelly Monaco) and Dante Falconeri (Dominic Zamprogna) in on Jason’s presumed death, he’ll have a reunion with Monica Quartermaine (Leslie Charleson) and all the rest. Drew’s return could be a game-changer when it comes to ELQ shares, so we’ll see how it all works out.

In the meantime, Sonny will seek assistance from Damian Spinelli (Bradford Anderson) while Carly Corinthos (Laura Wright) confronts Britt Westbourne (Kelly Thiebaud) over Jason’s fate. There’s a good chance Carly will put at least some of the blame on Britt for pushing Jason into dangerous territory.

After an eventful Thanksgiving dinner, Alexis Davis (Nancy Lee Grahn) will consider her future. She’ll need a new career path – and that’ll mean taking some college courses before long. Alexis will be determined to make the most of the second chance she’s been given.

Next, Carly will grow concerned after seeing something that makes her uncomfortable, so that could be a moment of connection between Sonny and Nina Reeves (Cynthia Watros) or a significant photo from Nixon Falls.

Back with Drew, it looks like he’ll bump into Maxie and make her a promise during the week of December 6-10. Drew won’t rest until Louise is found, but that won’t be the reassurance he thinks it is! Maxie doesn’t want Louise found until Peter August’s (Wes Ramsey) threat is officially over for good, so she’ll be on edge.

Sonny will encounter Britt and most likely let her know he doesn’t hold her at fault for Jason’s grim outcome. Carly will push Nina for answers next, so that may involve some uneasiness over Nina and Sonny’s lingering Nixon Falls bond.

Carly will want to get Nina’s version of events following a discovery, but Willow Tait (Katelyn MacMullen) is about to make a discovery of her own. It appears Willow may realize Nina and Sonny’s relationship went beyond friendship when he was living as “Mike.”

Willow seems poised to overhear that Sonny was in love with Nina – and Nina felt the same way. Nina will hope she can count on Willow for a favor, so Willow may agree it’s best not to stir the pot even further by telling Carly or Michael Corinthos (Chad Duell).

Over with Maxie again, she’ll come face to face with her past. Peter will be waiting with creepy comments and unnerving threats as Maxie rips into her ex behind bars. Afterward, Anna Devane (Finola Hughes) will have an offer for Peter to mull over – though you can bet it won’t involve freedom!

Brad, on the other hand, will stand a good chance of getting out of prison. To seal the deal, a Wu family member named Selina Wu will track Britt down and perhaps push her to speak on Brad’s behalf at his parole hearing.

Other GH spoilers say Michael will offer Brando Corbin (Johnny Wactor) and Sasha Gilmore (Sofia Mattsson) some comfort in their time of need, but Brando will turn to a surprising source of help later. There’ll also be a run-in involving Chase, Brook Lynn, Willow and Michael that sets the stage for major tension.

Finally, Sonny and Carly will have a difficult choice to make, which will probably involve Jason. Despite initially holding out hope that Jason might’ve survived, Carly and Sonny may have to accept that Jason’s dead. Some arrangements will be made, so Carly and Sonny might move forward with a memorial service.