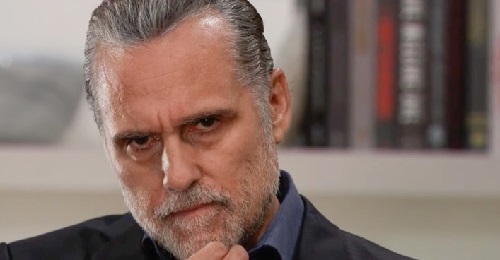 During the week of December 6-10, Nina Reeves (Cynthia Watros) will dodge one bullet only to get hit by another. She’ll manage to keep Peter August (Wes Ramsey) from revealing the whole truth about Nixon Falls to Carly Corinthos (Laura Wright), but more trouble will strike in the chapel later.

That’s where Willow will overhear more than she should, so she’ll contemplate whether she should blab to Carly and Michael Corinthos (Chad Duell). Nina will convince Willow to keep the love she shared with Sonny a secret – at least until Sonny can come clean to Carly himself.

As for Maxie Jones (Kirsten Storms), she’ll finally come face to face with Peter again. That’ll bring some unsettling moments ahead of Maxie’s warning for Austin Gatlin Holt (Roger Howarth). Maxie may point out it’s not a good idea to underestimate Peter and push Austin to keep his guard up.

At an undisclosed location, Laura Collins (Genie Francis) and Martin Grey (Michael E. Knight) will get some shocking updates about a very much alive Victor Cassadine (Charles Shaughnessy) scoring his freedom.

That news will leave Laura flipping out, but Martin will convince her to stay put instead of going home before it’s safe. Cyrus Renault’s (Jeff Kober) threat will remain an issue, but Martin and Laura will be hopeful about going home once it’s taken care of. Sonny seems to have a scheme that could help, so we’ll see how it all plays out.

After Michael learns Jason Morgan (Steve Burton) is dead, he’ll mourn the loss and get involved in another family crisis. There’s nothing that can be done about Jason, but Michael can still be there for Sasha Gilmore (Sofia Mattsson) and Brando Corbin (Johnny Wactor) in their time of need.

Over with Sonny, he’ll put a plan in motion by making some arrangements. Whether that involves Cyrus or perhaps a memorial service for Jason, Sonny will move forward with whatever he has in mind. He’ll face a tough decision with Carly by the end of a week, so a funeral could certainly be brewing soon.

Britt Westbourne (Kelly Thiebaud) will also receive a visit from Selina Wu, who’s a member of Brad Cooper’s (Parry Shen) birth family and someone who’s no doubt rooting for his freedom. Selina may urge Britt to stand up for Brad at his upcoming parole hearing and speak on his behalf.

During the week of December 13-17, GH spoilers say Brad’s parole hearing will indeed get underway. We should note that Sonny will do something surprising on the day that parole hearing happens, so he might pull some strings in Brad’s favor after all. Regardless, Brad will indeed come out of all this a free man.

Next, Elizabeth Baldwin (Rebecca Herbst) will grow closer to Hamilton Finn (Michael Easton) while Brando and Sasha get the EEG results for their baby. The outcome of that EEG may lead to more worries about Liam Corbin, but Carly Corinthos (Laura Wright) will give Sasha a pep talk later.

Sasha and Brando will also be there for each other as they keep hope alive. Across town, Drew’s visit to The Savoy will thrill Curtis Ashford (Donnell Turner). Unfortunately, it looks like Marshall Ashford (Robert Gossett) will barge in on the reunion and rile Curtis up again.

As for Anna Devane (Finola Hughes), she’ll get a surprise phone call. It’ll be interesting to see if that somehow relates to Peter and the threat he still poses. Austin will have some new info on Peter, so Britt will meet with him about his patient and remain concerned for Maxie Jones (Kirsten Storms).

Back with Willow, she’ll go out on a holiday shopping trip with Olivia Quartermaine (Lisa LoCicero). That trip will go wrong – and soon after, Michael will spot something that leaves him stunned. It’s possible another Nina encounter will derail Willow’s day and set the stage for Michael’s discovery.

It’s easy to imagine Michael watching Willow interact with Nina and getting the feeling there’s more going on. Since Willow will be keeping the truth about Sonny and Nina’s romance under wraps, there’ll be a lot riding on whether Michael investigates and how hard he pushes Willow for answers.

Meanwhile, the Davis girls will throw their support behind Alexis as she continues to adjust to life outside of prison. Sam will hold out hope that Alexis will join her as a PI partner, but what she’ll want most of all is a positive path forward for her mom.

Finally, Sam will try to help Drew bond with Scout Cain (Ella Ramacieri) again. It may be a slow process, but Drew will love every minute of getting to know his daughter.