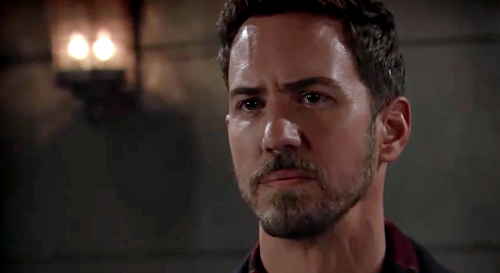 Time will be running out, so Liesl will feel like she has to act fast. GH fans can expect Obrecht to decide she needs to deliver a message to Maxie – perhaps one that contains incriminating evidence against Peter.

Maxie obviously isn’t going to take Liesl’s word for it, but firm proof would be helpful. If Liesl can offer a recording or something along those lines, it’d go a long way toward showing Maxie just how guilty her fiancé is.

GH spoilers say February 23 will bring Liesl’s urgent attempt to get this message to Maxie. Unfortunately, Maxie will still be looking forward to her future with Peter on February 24.

That same day, Peter will be forced to deal with a delay and will apparently keep Maxie waiting. February 24 will also bring a crime for Dante Falconeri (Dominic Zamprogna) to discover, so let’s put all these clues together.

It sounds like Peter will be delayed because he’s trying to stop Liesl from delivering this message. It makes sense that Dante will either discover the crime in progress or will perhaps find the aftermath of Peter’s attack on Liesl.

There’s no way Peter will stand by and let Liesl ruin things for him.

Peter’s dark side will be on full display as he scrambles to save his new life with Maxie, James West (Curtis and Owen Rufca) and unborn Baby Lou.

General Hospital spoilers say Peter will keep racking up secrets and transgressions to hide. It seems Peter may try to murder Liesl, but Dante’s arrival will hopefully mean that Obrecht is rescued in the nick of time.

Liesl may still end up with some injuries at GH, but we’ll just have to see how it all plays out. Regardless, Peter’s actions will add to his list of crimes and give Maxie something else to freak over once the whole truth is revealed.

We’ll bring you updates as other news emerges. General Hospital spoilers say Maxie’s in for a rude awakening once she’s presented with the cold, hard facts about the man she loves.

Maxie’s dream to live happily ever after with Peter will fall apart and leave the bride furious with the groom instead! CDL’s your one-stop source for terrific General Hospital spoilers, news and updates, so stop by again soon.

“I know what you both did to my daughter!” #GH pic.twitter.com/XrGIW0hbtZ