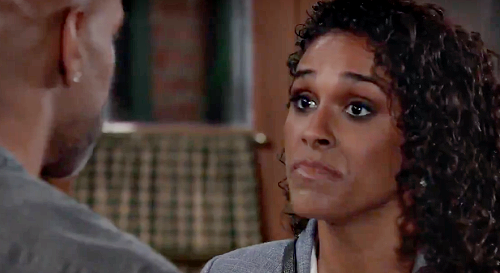 General Hospital spoilers reveal that the preview for Tuesday, August 3 teases that Jordan Ashford (Briana Nicole Henry) wants to save her marriage. This is a completely different stance than from earlier this week. Fans can also expect Portia Robinson (Brook Kerr) to threaten Stella Henry (Vernee Watson) and Willow Tait (Katelyn MacMullen) could get caught.

GH spoilers for Tuesday reveal the preview shows Jordan talking to Curtis about marriage and divorce. She finally signed the divorce papers and lets Curtis know. Going their separate ways was his idea because of all the secrets Jordan kept from him. She was heartbroken but tried to move on the best she could.

When Curtis learns that the divorce papers have been signed, he is taken aback by what Jordan says next. She implies that if Curtis had waited a bit before moving on with Portia Robinson (Brook Kerr), then she would have asked to give the relationship another chance.

Now, this puts him in an awkward position as he just started a romance with Portia. So, he will have to make a decision about which woman is right for him.

Stella is doing everything in her power to give Jordan and Curtis a fighting chance. Stella has no issues with telling people what she thinks and this includes Portia. At first, the doctor tried to be respectful and even backed away from Curtis.

When Stella confronts her again, she will be informed that her romance with Curis will end in pain.

In the preview clip for Tuesday, Portia raises her voice and jabs her finger at Stella. Portia warns her not to get near Trina Robinson (Sydney Makayla).

Nina Reeves Stuck In The Middle

General Hospital Spoilers For Tuesday reveal that Nina Reeves (Cynthia Watros) will have to give Sonny Corinthos aka “Mike” (Maurice Benard ) an answer.

However, Nina doesn’t want him to see Carly Corithinthos (Laura Wright). So, she will need to get creative with how she handles this situation.

Fans can also expect Trina to be devastated over what she learned about her mother. She will meet with Spencer Cassadine (Nicholas Alexander Chavez). Josslyn Jacks (Eden McCoy) will have a hard time as some poke fun at bad hair days.

Plus, Austin Gatlin-Holt (Roger Howarth) will tell Harrison Chase (Josh Swickard) that he needs to be honest. Then, Austin suggests that Chase go into the gatehouse as he wants to show Willow that he is starting to gain the ability to stand on his own two feet.

“My life is with you now.” #GH pic.twitter.com/QMXgrs5f8H