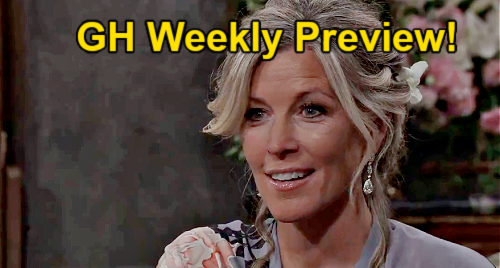 General Hospital spoilers reveal the preview for the week of September 13 to September 17 is tense. There are a few things going on, including Jason Morgan (Steve Burton) and Carly Corinthos’ (Laura Wright) wedding. Maxie Jones (Kirsten Storms) looks frozen and alarmed. Plus, Nina Reeves (Cynthia Watros) and Phyllis Caulfield (Joyce Guy) get caught in a fire.

GH spoilers reveal that it is the day of Jason and Carly’s wedding. Fans were hoping that Sonny would arrive in Port Charles by the time it begins so the wedding could be stopped.

It doesn’t look like that is going to happen, but it is teased that something big will take place. It means more betrayal to the Corinthos organization and they are working with Cyrus Renault (Jeff Kober).

In the weekly preview, Britt Westbourne (Kelly Thiebaud) sees Maxie in the hospital and comments on how great she looks. Maxie turns to look at Britt but doesn’t respond. Instead, she is frozen and looks alarmed.

We know that Maxie gets a phone call from Jasper “Jax” Jacks (Ingo Rademacher) at an inconvenient time. It is also stated that Maxie tries to keep the wedding on schedule.

Trapped in Fire at the Tan-O

General Hospital spoilers reveal that Peter August (Wes Ramsey) is back and is not pleased with Nina.

In the GH preview, Nina and Phyllis are screaming while tied up and gagged as the Tan-O erupts in fire. Not only is the whole building blazing, but it looks as if the bar area is too, which means they are surrounded.

On Friday’s episode, September 10, Sonny was on his way back to the Tan-O. It is teased that when he gets there, he is horrified by what he sees. Of course, it’s that the Tan-O is on fire. Once he learns that Nina and Phyllis are trapped inside, Sonny is going to fly into action.

What is interesting about this is that Sonny’s amnesia was due to trauma. In a sense, inhaling too much smoke may cause some trauma.

Maybe Sonny will be knocked unconscious after saving Nina and Phyllis. Or he might rescue them only to fall or trip and hit his head.

Could the trauma end up giving Sonny his memories back? We know Sonny is back to his old self and in Port Charles soon, so something reverses the amnesia. Stranger things have happened, so we will have to keep watching to find out.

“It will be a wedding to remember.” 💍 #GH pic.twitter.com/Ir6AMxOIwu