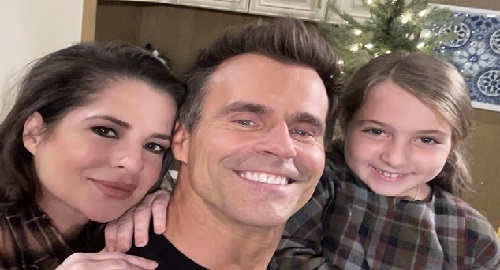 General Hospital (GH) spoilers tease that Sam McCall (Kelly Monaco) and Drew Cain (Cameron Mathison) have quickly become the perfect match. Kelly Monaco and Cameron Mathison’s onscreen chemistry was evident right off the bat and is a huge win for the show, so plenty of fans are already rooting for the new “Dream” and their family.

Back when Drew found out he wasn’t Jason, Sam tried to make it work until their relationship fizzled. She eventually ended up drifting back in Jason’s direction, but that reunion was plagued by problem after problem. Sam finally decided Jason’s dangerous lifestyle wasn’t something she wanted to be part of anymore, so “JaSam” was declared over.

Now Sam’s involved with Dante Falconeri (Dominic Zamprogna), but they’re not in so deep that she can’t back out. Sam was adamant about the mission to find Drew being solely about finding Scout Cain’s (Ella Ramacieri) father, but perhaps she protested a bit too much!

Everyone was curious what the new version of “Dream” would be like, especially since Sam and Billy Miller’s Drew had so many fans. Mathison has stepped into the role of Drew and made it his own, so there’s a great opportunity to continue Drew and Sam’s love story with a brand-new chapter.

Sam had an emotional reaction to Drew’s return that left tons of viewers swooning over their romantic potential. Thanks to Monaco and Mathison’s onscreen spark in their first scenes together, there’s major hope for the future of “Dream.”

Sam will no doubt help Drew bond with Scout in the weeks ahead, so there’ll be chances for some family bonding. Perhaps Drew can step up for Danny Morgan (Zakary Risinger) as he copes with the loss of Jason as well.

Now that Drew clearly remembers his past, he can become a fully formed individual rather than a man walking around with nothing but false memories. Drew can create something unique with Sam now that he’s got an identity separate from Jason, so that bodes well for “Dream” moving forward.

Even if it takes some time to find their way back to each other, Sam and Drew could become a hot GH couple once again. How do you feel about Kelly Monaco’s onscreen chemistry with Cameron Mathison? Are you sold on Sam and Drew as a perfect match?