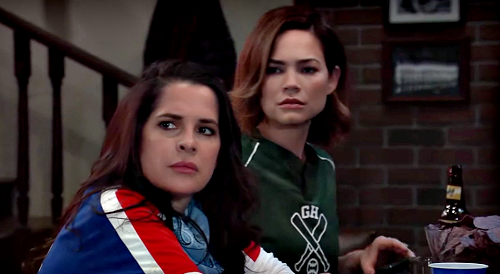 General Hospital (GH) spoilers tease that Sam McCall (Kelly Monaco), Elizabeth Baldwin (Rebecca Herbst) and Drew Cain (Cameron Mathison) could kick off a love triangle. There could be two exciting romantic options waiting for Cameron Mathison after he debuts, so let’s talk about what might be brewing.

GH has been mixing it up with some new couple possibilities lately. That includes Sam and Dante Falconeri (Dominic Zamprogna) as well as Liz and Hamilton Finn (Michael Easton).

However, these pairings aren’t going over all that well with many fans. Dante and Sam might be better off staying friends – and the same could be said for Finn and Liz.

Sometimes it’s just better for two characters to remain pals if the chemistry isn’t quite right for a romance. Whatever the case, maybe the show can do better by putting Drew at the center of a Liz and Sam love triangle.

Liz was once romantically involved with Jake Doe, who became Jason before he realized he was memory-mapped Drew Cain.

Of course, Sam has her own history with Drew, so it’s easy to see how Liz and Sam might wind up in a love triangle with him.

That’s especially true after the recent scenes where Liz and Sam lit that fire down by the docks. Liz helped Sam let go of Jason and declare her independence by burning some reminders of the past.

The ladies commiserated since Liz also loved Jason once upon a time and understood how Carly Corinthos (Laura Wright) would always come first.

Is the show building up a Sam and Liz bond just to tear it apart?

It’d be an interesting setup for a new love triangle with Cameron Mathison’s Drew at the center of it.

It seems like this version of Drew would look good standing next to Sam and Liz. There’s the potential for some sizzling chemistry for all parties involved.

We’ll fill you in as other GH news and updates emerge. General Hospital spoilers say Drew’s going to need a love interest once he’s home again.

Sam is a logical option, but perhaps we shouldn’t count out Liz just yet!

CDL’s where you want to be for thrilling General Hospital spoilers, updates and news posts, so check back often.