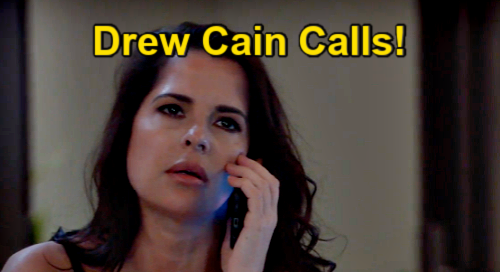 General Hospital (GH) spoilers tease that Sam McCall (Kelly Monaco) go undercover in Monte Carlo after a desperate phone call from Drew Cain (Cameron Mathison) – and her casino mission will lead to  answers. Of course, GH fans will recall that Robert Scorpio (Tristan Rogers) and Olivia Quartermaine (Lisa LoCicero) had a little casino adventure of their own in Monte Carlo back in September 2020.

It sounds like Sam may hit Cassandra Pierce’s (Jessica Tuck) old casino as well for this new storyline. A leaked script points to a dashing escort named Laurent taking Sam out on the terrace to show her the view.

Sam does her best not to blow her cover as she plays some spy games and tries to score the information she came for.

Shawn Butler (Sean Blakemore) recruited Sam to help him find out who really shot Hayden Barnes (Rebecca Budig), but this has turned into a mission to find Hayden, too.

Hayden could point the finger and put all this to rest, so Shawn and Sam are certainly motivated to track her down.

Sam’s time in Monte Carlo could be related to finding Hayden, but we also know Drew is being held captive in a foreign prison based on another leaked script.

Drew will be seen in captivity for quite some time, but he’s going to need a rescuer or two eventually – and sooner rather than later!

Since Sam and Shawn recently had a conversation about Drew, their Hayden quest could easily morph into a search for Drew if the right clues fall into place.

A mysterious phone call will come for Sam during the week of August 9-13 from Drew or someone pretending to be him and this kicks off the hot Drew Cain plot.

Sam will be instrumental in finding Drew down the road.

It’d be fitting since Sam loved Drew once upon a time and would certainly be invested in locating the father of her child, Scout Cain (Ella Ramacieri).

Whether this casino drama involves the trail leading to Drew or not, it’ll be fun to see Sam head to Monte Carlo and put her skills to good use!

CDL will have other scorching General Hospital spoilers, news and updates, so make us your number one source.