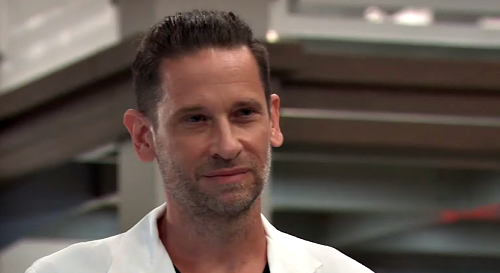 General Hospital (GH) spoilers tease that Austin Gatlin Holt (Roger Howarth) debuted at the end of May Sweeps. Howarth’s previous character, Franco Baldwin, died at the hands of a deranged psycho but Howarth was brought back to play Austin who has ties to the Quartermaine family.

Is Austin a good guy or a bad guy? Maybe he’s a gray guy? One thing is certain and that is that he’s been in town all summer and has yet to make a love connection.

Not that he hasn’t tried—he has made it evident that he’s into Maxie Jones (Kirsten Storms). But Maxie made it equally evident that she has no use for him as a boy toy.

Which means one thing: Austin and his bruised ego could be headed for a rebound situation. Here we lay down the odds of Austin hooking up with three of Port Charles’ most eligible and captivating bachelorettes.

GH Spoilers – Will Austin Holt Wind Up With Britt Westbourne?

The chances of Austin hooking up with Britt Westbourne (Kelly Thiebaud) are good to excellent. Both of them have been spurned and you know what they say about misery loving company.

What’s that you also say, she’s his boss and so a hookup would be inappropriate? Ha! Since when do soap characters behave with proper compunction?

We can see the soapy complications now…after their love connection, Britt doesn’t give Austin the raise he feels he deserves and he files a sexual harassment lawsuit…oy vey!

This one is a longshot, but the odds of Austin hooking up with Liz Webber (Rebecca Herbst) are compelling. That’s because many GH fans would love to see Howarth and Herbst team up again onscreen. Stranger things have happened!

Nonetheless, we think that the most promising, not to mention intriguing, matchup for Austin is with everyone’s favorite PC hot mess, Alexis Davis.

C’mon GH fans you can see this raucous hookup happening a mile away! Right now Alexis is on a roll championing lost causes, and Austin and his Quartermaine lust fit right into her newly found savior persona.

Alexis can’t sue the Q’s into accepting him, but she might be able to sway her former fling Ned Quartermaine (Wally Kurth).

At any rate, Alexis won’t be in jail forever, and when she gets out you can bet she’ll be looking for her next target, erm, man. Let the games begin!

Be sure to catch up on everything happening with GH right now. Come back here often for General Hospital spoilers, news, and updates.