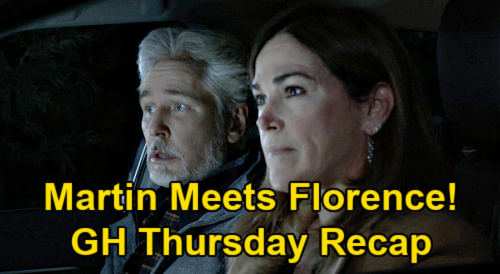 Unfortunately, Finn opined that the tumor hadn’t shrunk due to the radiation treatments, and Elizabeth got upset.

Elizabeth admitted to being angry with Franco for putting off his radiation treatments and possibly making the tumor harder to treat. Finn offered his support and helped Elizabeth get through her disappointment and her feelings of anger. Finn suggested that Elizabeth rely on her support system.

As it turned out, Ryan was in the hospital temporarily for bedsores, and Ava Jerome Cassadine (Maura West) walked in the room and taunted Ryan about the cockroach that she believes he sent her on Valentine’s Day.

Ava crushed the cockroach with her shoe in front of Ryan, and she spritzed him with perfume, knowing that he was allergic to perfume. Out in the hallway, Nikolas talked to Laura Collins (Genie Francis) about Spencer Cassadine (Nicolas Bechtel).

Nikolas said that Spencer was less than enthused about his “engagement” to Ava.

After Ava left Ryan’s room, she joined Nikolas and they left together. The guard returned to Ryan’s room and announced that he brought Ryan’s mail to him. The guard read Ryan a letter from a “Heather W.” who was his biggest fan, and he threw the rest of the mail down. 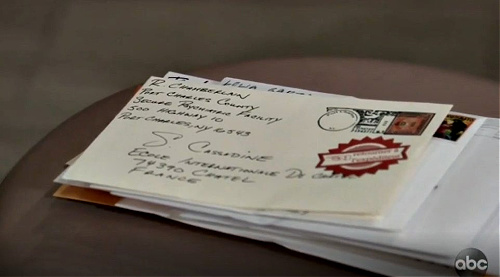 The camera panned to a letter on top of the pile, addressed to “S. Cassadine” in France, with a return address from Ryan. The letter was marked “return to sender” in French.

At Franco and Elizabeth’s house, Franco had a nightmare on the couch during which he heard Peter’s voice talking about Drew Cain (Billy Miller) and Jason Morgan (Steve Burton).

Afterwards, Cameron and Franco calmed down and talked. Cameron expressed anger toward Jason for his feelings toward Franco, and Cameron indicated that he might take Jason on.

Franco encouraged him not to. Through their conversation, Cameron said he wasn’t going to school in California after all, because he wanted to stay close now.

At the nightclub, Curtis Ashford (Donnell Turner) talked with Sam McCall (Kelly Monaco) over drinks. Curtis disclosed that he and Jordan Ashford (Briana Nicole Henry) were having troubles, and he said that he was rethinking his profession as a PI.

Curtis said that he wanted Sam to buy him out of the PI business, and he’d use the money to buy the club. Sam agreed happily.

Jordan explained that Cyrus had terms, and that the whole thing was a manipulation. Portia said that Taggert was refusing to see her and Trina Robinson (Sydney Mikayla) now, and Jordan agreed to talk with Taggert.

Eventually, Portia came to understand that Taggert was safest in jail and away from her and Trina, but she said that it was hurtful to Trina that Taggert refused to see her.

Jordan offered to ban Taggert from visitors, so that Trina would blame her and not Taggert. “That’s the best I can do for you now,” Jordan said.

Somewhere in the woods, Jason talked to someone on the phone. “Yeah, I see it,” Jason said, looking into the distance. “Don’t do anything yet. Let’s see how this plays out.”

In Vermont, Martin Grey (Michael E. Knight) and Jackie Templeton (Kim Delaney) sat in a car outside a safehouse. Jackie said that Bobbie Spencer (Jacklyn Zeman) was in that house with Florence Grey (Annie Abbott) and that they were going to go in at the right time.

Meanwhile, in the safehouse, Bobbie read a steamy romance novel to Florence, who listened intently.

Later, Jackie and Martin entered the house and into the bedroom where they believed Florence to be, but they found Jason instead. “Wrong room,” Jason said.

Later, Jason took Martin and Jackie to Florence’s real room, where Martin and Florence were thrilled to be reunited. Florence said that Bobbie and “Mr. Blue Eyes” were taking wonderful care of her.

Jackie said that Cyrus was anxious to see Florence, too, but Florence balked. Jackie asked Florence to tell her about Cyrus, holding out a microphone to record the whole thing.

"It's up to us that Peter never hurts anyone again." #GH pic.twitter.com/4A9PcDMiHq