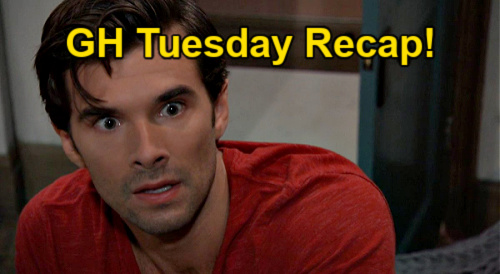 GH spoilers reveal that on Tuesday, Portia Robinson walked away from Stella Henry (Vernee Watson). Then, she spotted Trina Robinson (Sydney Makayla), who was in tears and ran off.

Stella realizes that Trina had no idea and offers to go after Portia’s daughter. However, Portia thinks Stella has done enough.

Curtis is stunned to discover that Jordan wanted to give their marriage another shot. He reminds her that love isn’t their problem — it’s trust. She vows to do whatever is necessary to repair the damage her secrets caused.

However, Curtis doesn’t think that there is anything that can be done as the truth has already been broken. Jordan realizes that she’s too late and her marriage really is over.

General Hospital spoilers reveal that on Tuesday, Spencer Cassadine (Nicholas Alexander Chavez) saw Trina in tears. He asked her what was wrong and she explains that her mother has been keeping secrets.

Spencer says he can relate and gives a little background on his own family drama. He suggests that Trina talk to her mom and she’ll feel a lot better once they hash things out.

Austin tells Chase that he’s sorry and that when it hits Chase. He tries to get upstairs but he hasn’t made that much progress yet and Austin tells him not to push it.

Chase is forced to wait downstairs until Michael and Willow finish their lovemaking session.

Suddenly, Willow feels guilty and wants to tell Chase the truth but Michael says that they won’t be keeping this secret forever. They decide to return to the party.

Still in the gatehouse, Chase insists on going upstairs and seeing the bed that was used. With Austin’s help, Chase looks around upstairs and sees the messy bed along with a condom wrapper.

As for Nina Reeves (Cynthia Watros), she prevented Sonny Corinthos aka “Mike” (Maurice Benard) and Carly Corinthos (Laura Wright) from seeing each other by ending the video call.

Nina ends up having a chat with Phyllis Caulfield (Joyce Guy), who reveals that she saw Valentin Cassadine (James Patrick Stuart). Phyllis tells Nina that there is unfinished business with Valentin.