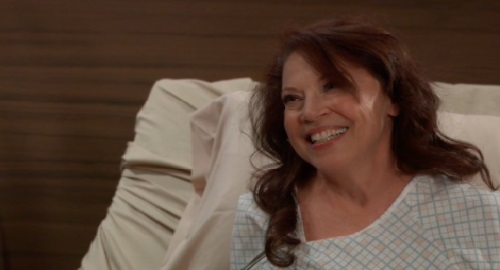 At GH, Britt Westbourne (Kelly Thiebaud) sent emails explaining how the staff should forward all requests to Dr. Terry Randolph (Cassandra James) and cried over being such a mess. After Austin caught Britt wiping her tears, he wondered what was wrong and wanted to help.

Britt jokingly suggested she’d have Austin fired if he told anyone what he saw. She admitted someone she cared about died saving her life and ultimately revealed it was Jason. Austin acknowledged that Jason was his half-cousin or something, but he didn’t know the guy very well.

Austin tried cracking some jokes to lighten the mood before realizing it wasn’t really appropriate. Britt was fine with it since it was better than platitudes. She never thought Jason would die before her, which puzzled Austin since Jason lived such a dangerous life.

Britt brushed past her comment, so Austin realized he was veering into inappropriate territory again and apologized. He offered to let Britt join him for turkey burgers and football watching, but Britt declined since she had something she needed to do.

In Liesl’s room, she battled nightmares and worried about Britt before Scott showed up for a heartfelt reunion. That led to passion erupting right there in Liesl’s hospital bed – just in time for Austin to walk in on them! Obrecht and Scott yelled for Austin to get out, so he made a hasty exit and looked a bit shaken.

Just outside the Corinthos kitchen, Carly Corinthos (Laura Wright) thought back to her last conversation with Jason and cried. She eventually joined Sonny Corinthos (Maurice Benard) inside and pointed out Jason could still be alive since there was no body.

Carly argued that everyone told her Sonny was dead, but he still came back. Jason also managed to cheat death before, but Sonny insisted no heartbeat was found on the scans in the tunnels. It was still hard for Carly to accept that Jason was really gone since she wanted to believe so badly he was alive.

Josslyn eventually came home and got the horrible news, so she cried in Carly’s arms and learned they were waiting to tell Michael Corinthos (Chad Duell) in person. After Joss left the room, Sonny decided to go read Donna Corinthos (Donna Corinthos) a bedtime story. He realized Sonny was gone when he came back down and grew concerned.

Sonny left Carly a voicemail before getting a call from an unknown number. It was Cyrus Renault (Jeff Kober) calling from his prison cell since he’d managed to acquire a phone. Cyrus taunted Sonny by acting like he wanted to reach out over the Jason tragedy. He made a point to mention how devastated Carly must be.

Sonny ultimately hurled the phone across the room in an intense moment of rage. He called Cyrus a “son of a bitch” and looked like he was ready for battle. Back with Carly, she wound up on the footbridge and had a montage of “Jarly” memories. When Britt showed up, Carly just glared at her.

At Sam McCall’s (Kelly Monaco) place, Dante Falconeri (Dominic Zamprogna) admitted the kids seemed to know something was up since they skipped Thanksgiving at the Quartermaine mansion. Danny Morgan (Zakary Risinger) had been looking forward to pizza, so Sam sarcastically said that was just great since she ordered turkey burgers and angrily hurled a glass across the room.

Sam was apologetic for the outburst afterward, which was clearly about Jason’s death. She ranted over the comic joke of Danny losing his father right as Scout Cain (Ella Ramaceri) got hers back. Sam feared Danny would hate Scout for that, but Dante didn’t think so since he had an awesome mom to guide him.

After Sam cuddled with Dante for a bit, he decided he’d better go. Sam insisted she wanted Dante to stay before they shared a steamy make-out session, which was clearly setting up an imminent romp in the sack.

At the Quartermaine mansion, Monica was thrilled over Drew Cain’s (Cameron Mathison) return and got a recap about his time as a hostage. Unfortunately, Drew had to admit to Monica and all the others that Jason’s efforts to save him cost him his life.

Monica realized Jason was truly gone and was quite broken up about it. Drew assured Monica that if he’d known what his freedom would cost, he never would’ve taken the deal. Monica didn’t want to hear Drew say anything like that ever again. She let Drew know that she loved both her sons and didn’t value one’s life more than the other.

The mood was somber for a bit as Drew, Monica, Brook Lynn Quartermaine (Amanda Setton), Harrison Chase (Josh Swickard), Ned Quartermaine (Wally Kurth) and Olivia Quartermaine (Lisa LoCicero) all accepted the news. Drew confided in Ned how heartbroken he was since he was finally starting to connect with Jason as his brother and a friend.

Even so, there was joy over Drew’s return. Olivia could see the wheels turning when it came to Ned’s war with Valentin Cassadine (James Patrick Stuart), which wasn’t over due to Drew’s ELQ shares.