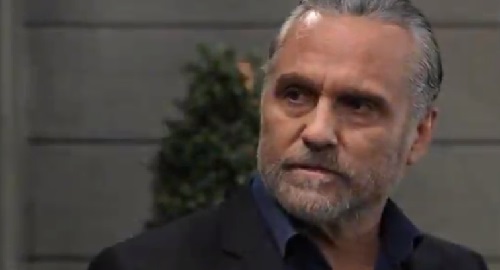 First, Drew will be surprised when his new cellmate is none other than Liesl Obrecht. Drew will wonder how Liesl managed to get captured and will battle suspicions about whether Obrecht might somehow be on the wrong side.

However, Liesl will assure Drew that she’s a captive just like he is. She’ll also reveal that Victor Cassadine (Charles Shaughnessy) and Peter August (Wes Ramsey) are working together, so Drew will realize this team is to blame for his current dilemma.

While Drew and Liesl become surprising allies, Valentin Cassadine (James Patrick Stuart) will let alcohol lower his inhibitions and give him courage to make another move with Anna Devane (Finola Hughes). Over drinks, Valentin will insist he’s seeing everything and will ultimately lean in for a kiss with the woman he wants.

As for Michael Corinthos (Chad Duell) and Willow Tait (Katelyn MacMullen), they’ll have a family fun day with Wiley Quartermaine-Corinthos (Erik and Theo Olson). It’ll feel delightfully domestic for Willow and Michael, who can now be a couple freely and focus on the joy parenting brings.

However, it looks like Nina may try to squeeze in one final visit with Wiley before all the Sonny drama blows up. As Willow steps out of the Quartermaine mansion living room with Michael, she’ll ask if he got the feeling that something was off with Nina.

Michael and Willow should both be puzzled over what’s going on, but Nina will plan to come clean soon after. Unfortunately, Nina’s timing may not be the greatest since Maxie Jones (Kirsten Storms) is feeling pressured to spill the beans to Carly.

Josslyn Jacks (Eden McCoy) just brought Maxie back to the Corinthos compound to blab – and on Tuesday’s GH episode, Carly will push Maxie to tell her what Nina knew and when. Maxie may confess that Nina grew interested in Sonny as “Mike” the bartender and has known the truth for months.

Just before Nina can admit how things went down, Carly may barge in for a heated confrontation. Whatever the case, Carly will indeed have a chance to unleash her wrath soon enough!

Jason will also find out it’s Nina’s fault that Sonny was away for so long. Sonny will offer updates on what happened in Nixon Falls, so he may reveal that the situation turned romantic since he couldn’t remember Carly, the kids or anything else about his life back in Port Charles.