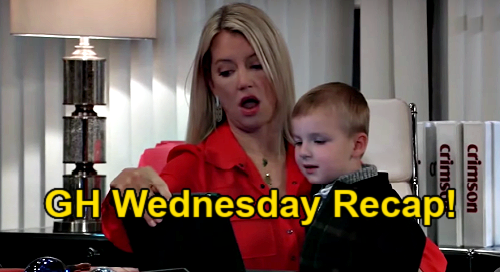 Carly shared that the case into Nelle Benson Jerome’s (Chloe Lanier) death was now closed, and about how Nina Reeves (Cynthia Watros) wanted a relationship with Wiley Quartermaine Corinthos (Erik and Theo Olson).

Meanwhile, at Crimson, Nina visited happily with Wiley, Michael Corinthos (Chad Duell), and Willow Tait (Katelyn MacMullen). Nina apologized to Michael for the scene at the cemetery, and Michael hoped that Nina could find a way to move past her issues with Carly for Wiley’s sake.

Nina was holding Wiley and looking at a fun app on her tablet when Carly walked in and was appalled by the scene. Carly shooed Michael, Willow, and Wiley out of the office, and Carly told Nina that if she didn’t play her cards right, this would be her last visit with Wiley.

After a lengthy argument over Carly and Jasper “Jax” Jacks’ (Ingo Rademacher) lies about Nelle, Carly warned Nina not to pull anything like the cemetery stunt again, or else she’d ever have a place in Wiley’s life. Nina insisted that Wiley was her grandson, too.

Robert insisted that he wasn’t going to just sit back and do nothing about the upcoming wedding.

Soon, the doorbell rang, and it was Alexis Davis (Nancy Lee Grahn), who had come to apologize to Olivia. Robert took off, and Alexis offered a true apology to Olivia about stabbing Dante Falconeri (Dominick Zamprogna) with the loaded syringe.

Olivia stopped short of forgiving Alexis, but she did say that perhaps Alexis took the first step toward changing things by coming tonight.

Later, Michael and Willow brought Wiley home, and they congratulated each other on doing a good thing by taking Wiley to see Nina.

At Peter and Maxie’s apartment, Liesl Obrecht (Kathleen Gati) snooped around the place and couldn’t find anything…until she spotted the envelope on the table from “D. Marick” in Budapest.

Liesl wondered why Anna Devane’s (Finola Hughes) sister’s dead ex-husband was sending Peter an envelope from beyond the grave.

Liesl opened the envelope, which contained a flash drive and a note saying: “Dear Peter – In the event of my death, I want you to hear the truth in my own words.”

Liesl put the flash drive in Peter’s laptop and watched a video from Alex Devane Marick (Finola Hughes). “If you’re seeing this,” Alex said, “I’m probably dead, but I don’t want the truth to die with me.”

Liesl watched the rest of the video off-screen, and she was happy about what she saw. Meanwhile, over at the club, Britt Westbourne (Kelly Thiebaud) and Maxie argued in typical fashion about Peter.

Maxie wondered where Peter was, since he was supposed to meet her at the club, and she thought about going home, but Britt stopped her, knowing that Liesl was at the apartment.

More arguing about Peter ensued, and Maxie gave an impassioned defense of her man, then she insisted on going home. Britt decided to go with Maxie.

Across town at Anna’s house, Anna gave Peter every opportunity to come clean about his crimes, saying that if there’s anything he wants to tell her, now’s the time.

Anna whipped out the paper trail connecting Peter to the OR assassin who tried to kill Franco Baldwin (Roger Howarth) and Andre Maddox (Anthony Washington).

Anna went on about how she was giving Peter a chance to clear his conscience, and she asked if Peter tampered with Drew Cain’s (Billy Miller) plane.

Peter insisted that Liesl framed him, and that whatever was in Anna’s documents was a lie that needed to be destroyed. Peter took the documents from Anna and threw then in the fireplace, and he told Anna that the next time he saw her would be on the day of the double wedding.

Peter kissed Anna on the cheek, leaving her very upset.

Anna called Valentin Cassadine (James Patrick Stuart), saying that she gave Peter every chance to come clean, and that his redemption was a lie. “We’ve turned a blind eye too long,” Anna said. “It’s up to us now to stop him.”

Back at the coffee shop, Jason and Robert met, and Robert worried that Jason might be taking his eye off of Peter. Jason shared that the article that Peter published in The Invader didn’t have anything to do with Franco’s tumor.

Robert was intrigued, but just then Jason got a message and announced that he was taking a trip out of town.

Back at Maxie and Peter’s apartment, Liesl was still inside when Britt and Maxie returned. Britt talked loudly in the hallway as a signal to Liesl, who quickly hid.

Maxie was preoccupied with where Peter might be, and Britt suggested that Maxie go lay down and get some rest. When Maxie left the room, Britt got rid of Liesl.

Soon, Maxie returned to the room, just as Peter walked in the door. Maxie wondered where Peter had been, and Peter apologized for worrying her and being unavailable.

That was a great episode of General Hospital – stay tuned tomorrow so you don’t miss a thing! And don’t forget to check CDL frequently for the latest General Hospital spoilers, daily episode recaps, and news.