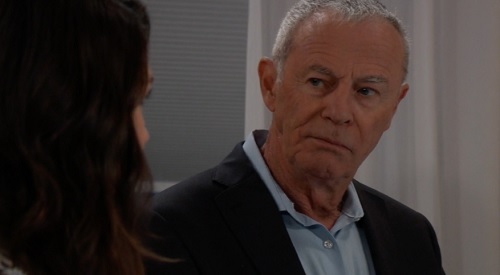 Chase might suggest playing nice with the guy, so Brook Lynn will at least offer Austin an apology for her recent outburst.

However, Brook Lynn will continue plotting against Austin and will eventually land in some trouble as a result. In the meantime, Maxie Jones (Kirsten Storms) will sit down for a chat with Austin at GH.

“Seems like I’m not the only one that could use protection,” Maxie says in Wednesday’s preview video.

It sounds like Maxie will find some reason to be concerned about Austin, but he’ll no doubt downplay whatever Brook Lynn or anyone else can throw his way.

Fans will also see Maxie have an epiphany about one of her friends, so it’s possible she’ll realize her feelings for Austin are deepening.

Maxie might start to view Austin as someone she could potentially have a real romance with, but we’ll just have to see how it goes.

Meanwhile, Dante Falconeri (Dominic Zamprogna) will pump the brakes with Sam McCall (Kelly Monaco), who won’t get why he wants to take things slowly between us.

Dante may insist he wants to do this right since he sees Sam as someone he could build a long-term future with. He may be scared of screwing it all up, but sometimes you just have to take a leap of faith.

Sam and Dante will manage to get closer despite Dante dragging his feet, stay tuned.

Next, Victor will continue his conversation with Valentin Cassadine (James Patrick Stuart), who’s being recruited at the moment. Victor wants Valentin’s help to go up against Peter, but he may not give Valentin the whole story.

Victor has just insisted that Peter will kill them both unless they work together. He’ll also explain a bit more about this risky plan of his. “Peter will be the guilty party, not me,” Victor declares in Wednesday’s preview clip.

Victor turned to Peter for help activating Drew’s old conditioning and wants to turn him into a killer. Perhaps Victor will hope to pass blame onto Peter and keep his hands clean in the aftermath. Regardless, we’ll see how much Victor divulges to Valentin.

It’s possible this is all a trap if Victor already knows Valentin’s baby girl is actually Louise August (Harper and Scarlett Bloom).

For now, Valentin will demand answers about what Victor’s doing to protect Anna, so Victor should offer a promise about Anna’s safety – that is if Valentin cooperates!

Meanwhile, Anna will gain the upper hand on the bartender she talked to. It looks like Anna will realize the guy might’ve had a hand in kidnapping Valentin, so she’ll want to question him.

Unfortunately, it seems someone else might sneak up with a gun based on Wednesday’s preview video.

“Robert, move!” Anna shouts as she apparently positions the bartender to use as a human shield. Robert and Anna will prove to be an impressive duo, so don’t miss their team effort.

As for Drew, he was seemingly just activated and prepped for a new mission. Peter showed Drew a tower tarot card and said the trigger phrase, so Drew reported for duty.

Is Drew really under Peter’s control now or could he be faking the trance? It’ll be interesting to see what plays out once Drew’s given his assignment.

CDL’s where you want to be for fantastic General Hospital spoilers, news and updates, so drop by frequently.