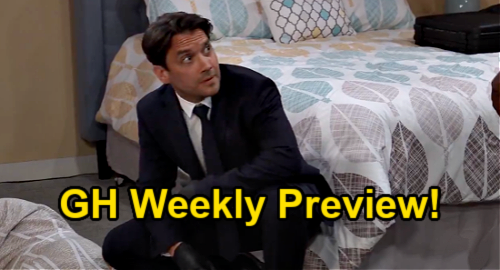 General Hospital spoilers reveal that the weekly preview for August 9 to August 13 shows a woman’s dead body lying on the floor. Dante Falconeri (Dominic Zamprogna) checks for a pulse and silently indicates the person is dead. We also see Shawn Butler (Sean Blakemore) and Sam McCall (Kelly Monaco) walk into what appears to be a hotel room. Could the scenes be connected?

GH spoilers reveal that the weekly preview starts off with Ned Quartermaine (Wally Kurth) bursting through the door. He calls out “family meeting” and appears to be pressured.

We know that this week, Ned realizes that Dr. Austin Gatlin-Holt (Roger Howarth) might be more of a problem than he initially realized.

We can also confirm that Austin’s big idea for Harrison Chase (Josh Swickard) is so he can have time to find papers that he needs to win the lawsuit against the Quartermaine’s.

In exchange, Austin is willing to get vengeance for Chase by making sure Michael loses something important to him.

Next up in the weekly preview is Dante, who is kneeling down checking the pulse of a woman on the floor. It appears to be a hotel room and Dante looks up and shakes his head, confirming she is dead.

All we can see of the woman is she’s wearing a fancy dress.

Then, the preview switches over to Sam saying, “Oh, my God.” She joins Shawn, who is just standing at a door frozen. They look as if they are at the entrance to a hotel room.

So, is Dante’s scene connected to Shawn and Sam’s?

It seems like they are and we know that Shawn tracks down Naomi Dreyfus (Gigi Bermingham). While it appears that the woman must be Naomi, previews sometimes have creative editing, so we will see.

General Hospital spoilers reveal that the next scene in the weekly preview features Jason Morgan (Steve Burton). He reassures Carly Corinthos (Laura Wright) that they will face them together.

They must be talking about calling a meeting with the Five Families. As fans recall from last week, Joey Novak (Patrick Zeller) approached Josslyn Jacks (Eden McCoy).

Cameron Webber (Michael Lipton) tried to impress Josslyn by acting tough and disrespectful to Joey. This was not a smart move on Cameron’s part and hopefully, there are no consequences.

Willow Tait (Katelyn MacMullen) talks to Michael and says that this cannot go on. We doubt she is talking about ending her secret romance with him. She probably wants to end playing games with Chase.

They don’t realize that they have been found out. If Willow and Michael admit to Chase the truth and why they did it, they could avoid big problems.

Even though Austin’s offer would make Chase behave completely out of character, we have to think that’s the way this is going.

Soaps don’t get drama by the characters making good choices. So, expect a twist in this storyline that will blow everything up.

“We could be looking at a major crisis.” #GH pic.twitter.com/YnQk3oKxQ6