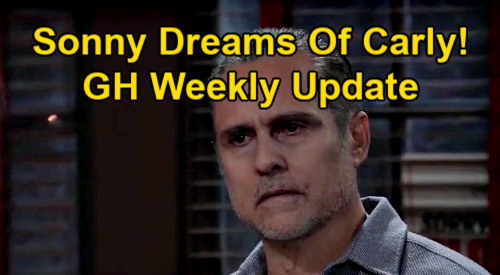 General Hospital (GH) spoilers update for the week of February 15, tease that things will pick right back up since the special news preemptions appear to be over. The good news is that viewers won’t miss an episode, and we’ve got the scoop right here about what to expect this week.

First off, the residents of Port Charles will prepare for Sonny Corinthos’ (Maurice Benard) funeral service.

Carly Corinthos (Laura Wright) just won’t know if she can go through with the service and say her final goodbyes to Sonny, but she’ll get some pep talks from Jason Morgan (Steve Burton) and Jasper “Jax” Jacks (Ingo Rademacher) spurring her on.

The funeral will get underway, but it won’t be without some major drama. As it will turn out, Nina Reeves (Cynthia Watros) will overhear Jax and Carly talking before the service as they lay out exactly what happened to Nelle Benson Jerome (Chloe Lanier) on that cliff when she died.

Nina will hear every word, and she’ll get the impression that Carly could have saved Nelle’s life but didn’t.

Of course, this will incense Nina, who will subsequently pay Nelle’s gravesite a visit. Nina will promise her daughter that she’ll avenge her death and make Carly pay for what she did.

By the time Sonny’s funeral is over and the family makes its way to the cemetery for the burial service, Nina will have just finished her visit with Nelle, and she’ll be ready for a fight.

Look for a furious Nina to cause a big scene at Sonny’s gravesite as she calls out Jax and Carly for what they did to Nelle. It won’t be the time nor place for such a confrontation, but it’s going to go down anyway!

Well, as GH viewers are aware, Sonny will be alive and well and calling himself “Mike” over at the TAN-O Bar with Phyllis Caulfield (Joyce Guy) and Lenny Caulfield (Rif Hutton).

Sonny will have some drama of his own, as he remembers someone important in his dreams. Sonny will have a dream about Carly, even though he won’t be able to see her face in the dream and he won’t realize who she is.

Sonny will know, however, that this woman from his dreams is someone important to him. Meanwhile, Officer Ralph Finchley (Tatum Shank) will strongly suspect “Mike” in a series of robberies near the TAN-O Bar, and he’ll basically come out and accuse Sonny of the crimes.

While all this is going on, Alexis Davis (Nancy Lee Grahn) will be skipping Sonny’s funeral and spending some time with Molly Lansing-Davis (Haley Pullos).

Alexis will not be feeling up to the funeral, and so Kristina Corinthos-Davis (Lexi Ainsworth) and Sam McCall (Kelly Monaco) will head to the service while Molly stays with her mom.

Alexis will admit to Molly that all she wants to do is drink, and that she’s thinking about changing her plea in the syringe stabbing case to guilty. Molly won’t think that’s a great idea, and she’ll suggest that Alexis stay the course and go with Martin Grey’s (Michael E. Knight) suggested defense of diminished capacity.

Other GH spoilers for the week of February 15 say that Laura Collins (Genie Francis) will reluctantly take the opportunity to spend a little time with Cyrus Renault (Jeff Kober).

Cyrus will offer Laura a deal – he’ll stay away from Sonny’s funeral if Laura has coffee and conversation with him. It will just be another attempt on Cyrus’ part to insist that he and Laura are just alike – something she’ll refute.

Speaking of Cyrus, as the week progresses on General Hospital, Lesley Webber (Denise Alexander) will take a stand – something that will probably have to do with Cyrus and his infiltration of Laura’s life.

Meanwhile, Britt will continue working with Jason, and she’ll confide in him about something during the week of February 15. Then, as the week draws to a close, Britt will call on Jason for help, so things with Cyrus could start to get out of hand.

Might Cyrus start pressuring Britt when it comes to those heavy grade pharmaceuticals that he’s developing in the hospital labs?

Other General Hospital spoilers say that Olivia Quartermaine (Lisa LoCicero) will express her anger, which will probably be directed squarely toward Alexis.

GH viewers will remember that Olivia has previously promised to make Alexis pay dearly for not only sleeping with Ned Quartermaine (Wally Kurth) but also for attacking Dante Falconeri (Dominick Zamprogna) with that loaded syringe.

Speaking of Dante, he and Sam will make a connection during the week of February 15, even though Sam and Jason will connect in their own way.

At Sonny’s funeral, Sam will be there to support Jason, telling him specifically that she’s there for him – something that will mean a lot to Jason.

Meanwhile, as the week progresses, Carly will take a meeting with Diane Miller (Carolyn Hennesy), most likely to get in front of whatever trouble Nina might make for her regarding Nelle’s death.

Nina will be talking to Jordan Ashford (Tiffany Daniels) as well, so she may want to do everything in her power to make sure that Carly goes down for Nelle’s death.

Carly will probably be worried that the Pennsylvania detective is going to come after her again in the case of Nelle’s death – and he sure will if Nina has anything to say about it. Diane will probably tell Carly to keep her mouth shut and stay the course if she wants to stay out of jail.

As the week reaches its end, it will be Valentine’s Day in Port Charles, and Ava Jerome Cassadine (Maura West) and Nikolas Cassadine (Marcus Coloma) will have a nice dinner out as Nikolas showers Ava with attention and love.

The evening will be going smoothly until Ava gets a mysterious package – which she’ll think is another gift from Nikolas.

Unfortunately, the “gift” will be something gruesome, and it definitely won’t be from Nikolas. It looks like Ava and Nikolas’ initial concern will be that perhaps Ryan Chamberlain (Jon Lindstrom) could be behind the creepy package, so there will be some investigating to do after the fact as to who the sender is.

Valentin Cassadine (James Patrick Stuart) will also be on the scene during the week of February 15, as he suspects he may have a second chance regarding something.

This will almost certainly have to do with Nina, since there’s simply no way that Nina will ever take Jax back at this point. Valentin may see an opportunity here to help Nina get revenge on Jax!

Other General Hospital spoilers for the week of February 15 say that Brando Corbin (Johnny Wactor) will once again find himself on the receiving end of Cyrus’ wrath, and around that same time, he’ll feign ignorance about something, he could be playing a dangerous game.

And Portia will go on a stakeout with Curtis Ashford (Donnell Turner), who will remain estranged from Jordan. It’s certainly looking like Curtis and Portia could rekindle things, but Curtis will probably be hesitant to act with Portia until he figures out what’s going to happen with his marriage to Jordan.

If Curtis and Portia get closer, then that could force Curtis into a decision about his marriage!

It’s going to be a great week on General Hospital, so stay tuned! Stick with the ABC soap and be sure to check CDL as often as you can for the latest General Hospital spoilers, daily episode recaps, and news.

Scheduling Update: Tomorrow’s all-new #GH will pick up exactly where we left off – with the episode originally scheduled to air this past Tuesday (February 9th). See you then! #GeneralHospital pic.twitter.com/fLYwYYevHX