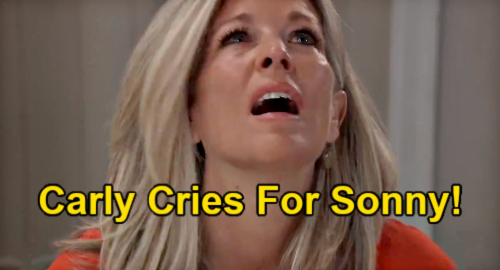 General Hospital spoilers tease that the weekly preview for June 7 to June 11 shows at least two residents of Port Charles have blackmail on their minds – one, Brook Lynn Quartermaine (Amanda Setton) and the other Jasper Jacks (Ingo Rademacher)!

Brook Lynn’s baby plot is working like clockwork, although she hasn’t asked Valentin Cassadine (James Patrick Stuart) for his ELQ shares just yet.

General Hospital viewers will recall that she had concocted a fake pregnancy in order to get the shares back from Valentin, with him having figured out quickly that he was the father.

In the meantime, Maxie Jones (Kirsten Storms) had needed a way to protect her baby with Peter August (Wes Ramsey), Louise August (Harper and Scarlett Bloom) from Peter, who had become more and more obsessive and dangerous.

Brook Lynn smirks, undoubtedly thinking Valentin won’t know what hit him as he looks adoringly at “Bailey Lois Quartermaine” in Olivia Quartermaine’s (Lisa LoCicero) arms. Valentin says there’s nothing like a baby to bring a family together.

Trina Robinson Sits At Curtis Ashford’s Bedside, Begging Him To Wake Up

At General Hospital, Trina Robinson (Sydney Mikayla) sits at an unconscious Curtis Ashford’s (Donnell Turner) bedside. She is nearly in tears as she continues to beg Curtis to wake up.

Viewers will recall Curtis was shot when he tried to rescue her mother, Dr. Portia Robinson (Brook Kerr) and Mayor Laura Collins (Genie Francis) from a wounded and desperate Cyrus Renault (Jeff Kober).

Renault, fresh from being shot by Jason Morgan (Steve Burton) in a standoff at Pier 55 had fled to Portia’s house for medical aid. Laura had convinced Cyrus to let her trade places as a hostage with Trina, who obviously feels responsible for Curtis’ shooting. Curtis is fighting for his life.

Jasper Jacks Wants To Know What’s Going On With Michael

In Friday’s General Hospital episode, June 4, Jax had been looking for Michael at the Quartermaine mansion, and Olivia had told him he was in the gatehouse.

Once Jax got there, he couldn’t help but see Michael getting naked with Willow Tait (Katelyn MacMullen) on the couch through a front window with no curtains or blinds closed!

After all, they wouldn’t want this to get back to Harrison Chase (Josh Swickard)!

Back at General Hospital, Dr. Hamilton Finn (Michael Easton) is sullen and negative as he talks to Nurse Elizabeth Baldwin (Rebecca Herbst).

Finn flashes back in his mind to pushing Peter August down the staircase to his death, knowing that when Peter died that any chance of saving Harrison Chase died with him.

There was no reason for Finn and Elizabeth to believe that Peter was still alive when they checked him, as he was bleeding profusely from the head and Elizabeth couldn’t get a pulse.

However, Finn didn’t have his stethoscope with him.

Even if Peter wasn’t dead he wasn’t going to give any more doses of the antidote to Finn to save his son’s life anyway, it was Peter’s throwing the vial that he had off the roof of General Hospital that made him so angry in the first place!

Finn tells Elizabeth that he may as well have killed Chase himself, but Elizabeth will encourage him to keep trying to come up with a cure in future episodes.

Back in Port Charles, Carly looks at a photo of him and looks like she is going to start crying again.

But in Nixon Falls, it’s a different story, as Phyllis Caulfield (Joyce Guy) and Nina talk about “Mike”.

Phyllis asks Nina why there would be anything wrong about Nina and “Mike” having feelings for each other. Nina just shakes her head and tells Phyllis she has no idea.

Stay tuned to General Hospital on ABC and keep checking CDL frequently for all the latest news, updates and developments!

“I might as well have just killed Chase myself.” #GH pic.twitter.com/vTIfNq6lAP