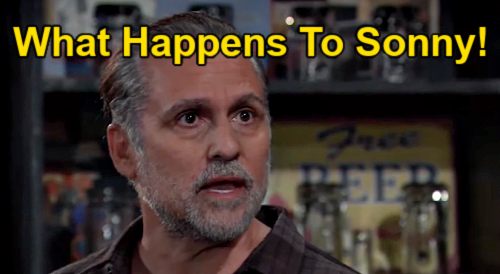 Carly confessed she wasn’t sure if Sonny would approve, but Jason pointed out that Sonny was gone.

Although Jason misses Sonny every day just like Carly does, he was adamant that this marriage had to be about their own feelings – just the two of them without fear of what Sonny would or wouldn’t want.

Jason and Carly talked things over in a crucial conversation ahead of the marriage ceremony, so they’re both feeling good about where they stand.

However, Carly and Jason don’t realize that Sonny’s alive and has been living in Nixon Falls all this time.

Now that Jason and Carly have flipped the switch when it comes to their romantic feelings for each other, they can’t just snap their fingers and go back to how things were before.

Sonny will inevitably return to Port Charles at some point, so that’ll throw Carly and Jason for a loop. If Sonny hasn’t regained his memories by then, Carly may feel disconnected to him as “Mike.”

Even if Sonny’s memories come flooding back, Carly will no doubt find it hard to resist Jason – at least for a while.

General Hospital offered a “Jarly” turning point that they just can’t undo! Naturally, we should think about what might happen if GH decides to stick with Jason and Carly as a couple.

Sonny could still end up pursuing a new chapter with Nina Reeves (Cynthia Watros) despite her lies.

The love Sonny has for Nina won’t go away anytime soon. Perhaps Sonny could still forgive and forget!

In other words, “Jarly” preservation could open the door to Sonny being with Nina or any other woman for that matter. The show could use this as a way to keep shaking things up in the Port Charles love department.

On the other hand, it’s possible this story’s meant to move Carly into Jason’s orbit and leave her content – especially if Sonny dies for real or moves away.

If Maurice Benard decides to retire, that’ll bring the end of “CarSon” and could keep “Jarly” solid.

Nevertheless, Jason and Carly seem more like a plot point at the moment.

That could change down the road, but Carly and Jason’s romantic feelings just feel like a poor excuse for angst that’ll eventually fade away.

Plenty of viewers have complained about Jason and Carly getting together at all. The show might want to monitor the fan reaction and change course in need be – regardless of Sonny’s outcome!

General Hospital spoilers say the situation will remain complicated for Jason, Carly and Sonny, so don’t miss what’s in store.

CDL will have lots of other great soap spoilers, news and updates, so pop back in frequently.