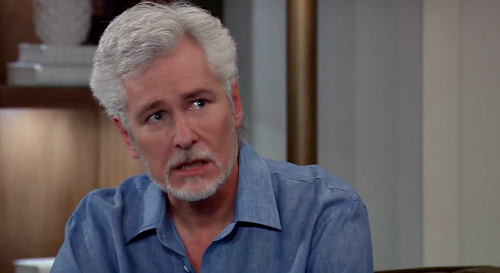 GH fans know Martin has been holed up at an undisclosed location along with Laura Collins (Genie Francis). Since Cyrus put a contract out on Laura and Martin, they had to go into hiding for their own protection.

However, Laura isn’t one to cower indefinitely and is no doubt eager to get back to her old life. We can’t forget that Laura is still the mayor and has citizens to serve.

Laura also misses Kevin Collins (Jon Lindstrom) and wants to be around so she can help Spencer Cassadine (Nicholas Chavez) navigate his tricky future.

Martin doesn’t have as much waiting for him back home, but he surely wants to score his freedom and get back to his career. Unfortunately, Cyrus will have other plans once he finds out Laura and Martin are on their way back to PC.

Whether the PCPD thinks the danger’s gone or not, Cyrus will have another round of battle in mind.

Although Cyrus will target both Laura and Martin, Laura obviously isn’t going to die at her brother’s hands. She’s too important of a character and is returning for her next stint, not concluding it.

Nevertheless, there’s perhaps a great deal more danger to Martin, who could be considered an expendable character depending on what story the show wants to tell. Martin will indeed land in peril as he fights to reenter Port Charles and pick up the pieces of his old life.

Laura will face her own struggles, but she’ll also have to intervene and try to keep Martin alive!

It won’t be easy and could end in disaster if the two of them let things get out of hand. Even if Martin survives Cyrus’ next reign of terror, there’s the potential for serious injuries.

Martin is the one facing the most risk since he’s rather disposable as far as characters go and could be used to send a grim message to Laura.

One way or another, General Hospital spoilers say Cyrus will try to show his siblings whose boss!

CDL’s where you want to be for thrilling General Hospital spoilers, updates and news, so make us your one-stop source.