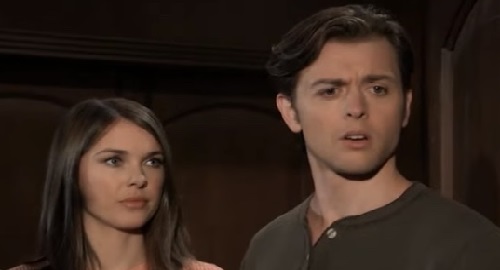 General Hospital (GH) spoilers tease that Willow Tait (Katelyn MacMullen) may find out Nina Reeves (Cynthia Watros) and Sonny Corinthos (Maurice Benard) were in love back in Nixon Falls, but will she hide the truth from Carly Corinthos (Laura Wright) and Michael Corinthos (Chad Duell)?

Willow has already been concerned about the level of anger she’s seeing from Michael and Carly. Michael had Nina arrested for identity fraud – and Carly threatened to call the cops over Nina’s harmless, inadvertent encounter with Wiley Quartermaine-Corinthos (Caleb and Kyler Ends).

Willow certainly doesn’t approve of the pain Nina caused by keeping Sonny’s survival a secret, but she’s also being the most rational one of the bunch and understands they have to do what’s best for Wiley. If Wiley runs into his grandma and wants to spend a few minutes with her, that’s not going to hurt anybody.

Nevertheless, Carly in particular can’t handle the idea of Nina having any kind of happiness after what she did. She wants Nina to pay and doesn’t think anyone should cut her any slack.

Since Carly is already so outraged when it comes to Nina and all the Nixon Falls drama, Willow may land in a tight spot once a secret is discovered. Let’s consider the latest General Hospital spoilers and how Willow may become privy to something she’d rather not know.

Carly will see something that leaves her unsettled on December 3, which will lead to her pushing Nina for answers on December 6. That could mean Carly will spot a warm embrace between Nina and Sonny – perhaps as Nina tries to comfort Sonny over Jason Morgan’s (Steve Burton) presumed death. Then again, it could be a Nixon Falls photo where Nina and “Mike” look a little too cozy.

Of course, Nina might downplay her old bond with Sonny and lie that it was merely a friendship. Once Carly’s gone, it’s easy to imagine Nina confiding in Phyllis Caulfield (Joyce Guy) and mentioning how horrible it would be if Carly knew the truth – that Nina and Sonny were in love.

December 6 is also when Willow will learn some stunning info, so maybe she could be eavesdropping nearby at Charlie’s Pub. GH spoilers say Willow will mull over her next move on December 7, so that could mean she’ll have to decide whether she’ll spill the beans.

On December 8, Nina will seek a big favor from Willow. That could involve asking Willow to keep Nina and Sonny’s Nixon Falls romance under wraps. Willow wants an open and honest relationship with Michael, but exposing that romance would only add to all the family drama.

Willow might make the difficult decision to keep Nina’s secret, especially since everyone will already be struggling over Jason’s demise and everything happening with Brando Corbin (Johnny Wactor) and Sasha Gilmore’s (Sofia Mattsson) baby. Perhaps Willow will determine there’s no need to pile anything else on!

As other GH news and updates emerge, we’ll keep you in the loop. General Hospital spoilers say Willow has a tough predicament in her future, but she may hide a shocking truth for all the right reasons. CDL’s where you want to be for hot soap spoilers, updates and news, so stop by frequently.