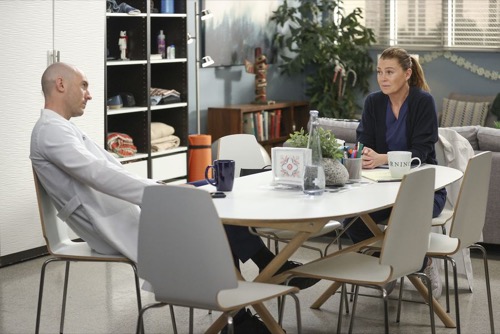 Tonight on ABC their hit drama Grey’s Anatomy returns with an all-new Thursday, December 16, 2021, season 18 episode 8 and we have your Grey’s Anatomy recap below. On tonight’s Grey’s Anatomy season 18 episode 8 called “It Came Upon A Midnight Clear,” as per the ABC synopsis, “The doctors of Grey Sloan Memorial celebrate the holidays; Hamilton and Meredith prepare for a milestone on their project; Link wants to spend the holiday with Amelia and Scout as a family; Schmitt is faced with a difficult decision during surgery.”

In tonight’s Grey’s Anatomy episode Dr. David Hamilton visited Seattle. His super secret project had people sniffing around because of Meredith Grey’s involvement and so they needed to do one final step of testing the procedure elsewhere. Hence Hamilton came to Seattle. He even brought along Kai. Kai and Amelia were still flirting and doing a will they or won’t they thing. It was going to make thing awkward with Link.

Link has recently come to the conclusion that he doesn’t need to get married right away and that all that matters is if he was with Amelia. He’s still in love with her. He wants to make things work and his best friend didn’t have the heart to tell him that he might be wasting his time. Link still wanted Amelia. Amelia has moved on. And then there was Meredith.

Meredith was back in Seattle. She was working out of Grey Sloane and she ran into Hayes. Its been a few months since they tried dating. It didn’t work out, but they were still friends and they both checked up on each other and asked about the other’s children. Hayes seemed to be interested in Megan. They bonded as he was treating her son and its why Hayes took the good news so well. There was a heart that was a match for Farouk.

It just needs to be transported to the hospital and so Owen wanted to collect the heart personally. Farouk was his nephew. He wanted to feel like he was doing something. He agreed to go get the heart and in the meantime the hospital prepared for the transplant.

Hayes and Teddy went with Owen. Teddy because she was a cardiologist. Hayes because he wanted to tell Megan’s family that she wasn’t alright and that she’s seems troubled. Hayes thought she was depressed. She said something that implied self-harm. Hayes didn’t think that would just go away once her son gets a new heart and so he thought her family should do something about it. Both Owen and Teddy tried to make excuses.

They tried to claim that Megan would be alright because she was going to therapy and she lived with them but Hayes pointed out that he knows Megan hasn’t been home in days if not weeks and it doesn’t look like she sleeps either. She just stays by her son’s bedside.

The three of them were still talking about it when their driver had what looked like a heart attack. He lost control of the car and they couldn’t get control of it again. The car crashed. It fell into a tree and three lied on a cliff. The wrong movement would have them all die. They didn’t have cell service and so they couldn’t call for help.

They also couldn’t get out of the car. They were just stuck and no one was expecting them for another three hours. Back at the hospital, Winston was prepping Farouk for surgery. They were going to open him up in preparation for this new heart and that could lead to risks. The hospital went about its typical day. Jo was battling the secret feelings she has for Link and Link was thankfully stopped before he flew to Minnesota.

Amelia wasn’t in Minnesota. She was in Seattle. She and Meredith were prepping Hamilton for the risky surgery when they were informed by Kai that he has a fever and so they tested him. He has a ruptured bowel. He needs surgery. He couldn’t get the possible cure injected into him because he has to be healthy for it to get FDA approval and this meant that their research was delayed. Hamilton naturally didn’t take it well. He wanted to push ahead in spite of needing surgery and Meredith had to tell him “no”. Amelia was off discussing her crush. Kai wasn’t waiting on the sidelines and so it was just Meredith that had to take Hamilton’s manipulation and abuse. And she had to get her mother’s situation thrown in her face as well.

Richard meanwhile gave Schmitt free reign to perform part of a surgery and Schmitt started working past the point he should have stopped to wait for an attendee. Schmitt’s patient was a guy who does podcasts. Schmitt was a huge fan of his and unfortunately the man was left bleeding out on his table. They later had to call the time of death. Schmitt will now have to face disciplinary actions from this and he isn’t going to be okay. But Link later found out Amelia had moved on when he went to go tell her he loves her only to find her with Kai. The two were kissing and so that put an end to his dreams. Teddy meanwhile escaped from the car and she went back to the road to get help. And unfortunately no car was passing by and the car they almost hit hadn’t bothered to check on them.

Hamilton’s health also took a turn for the worse and Meredith had to perform emergency surgery. Owen quickly realized that the car was going and so he asked Hayes to get out in time. He also told Hayes to fulfill a promise he made to put soldiers out of the pain. And he even said where the drugs were located when the car went over the cliff.

It took Owen and the driver with them.