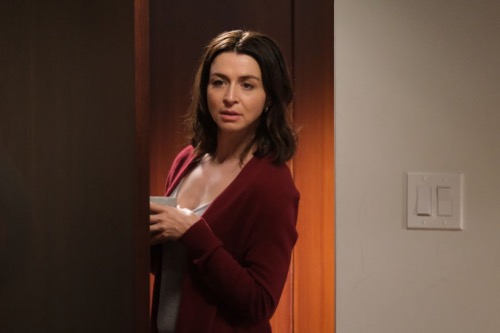 On tonight’s Grey’s Anatomy episode, Teddy is ill. She was found after DeLuca’s memorial sitting on the sidewalk and not noticing or taking in what was happening around her. She was in a fugue state. She wouldn’t sleep. She wouldn’t eat. She wouldn’t even talk to Owen. Owen brought her back to his house so that he could take care of her and he couldn’t really doing anything. Not as a friend or an ex.

He had to treat her like a doctor treating his patient and he later had to put her on an IV drip because she needed fluids. Owen called Amelia to drop the items off. He explained to Amelia what was happening and she became concerned. She wanted to see how Teddy was doing for herself. She believes she can help because she fell into depression after she lost her fiancé and baby back to back and so she thought she could talk to Teddy.

Except Teddy was lost. She was trapped in her own mind and she was reliving her worst fears. She kept seeing herself in the OR with her friends on the operating table. If it wasn’t DeLuca, it was Meredith. She was doing her best to save their lives and nothing she did seemed to work. She lost DeLuca. He died on her table a few weeks ago and now she feels like she’s losing Meredith as well. Meredith hasn’t come out of her coma.

Teddy had to intubate her and she’s done everything she could think of to wake up Meredith. It just wasn’t working. Meredith was out on her “beach” and now she was visiting Teddy in Teddy’s nightmares. Teddy has always had problems. She was with the original Allision romantically and together they were cheating on Allison’s girlfriend.

Allison died on 9/11. Teddy joined the Army because she wanted to do her part in the war on terror and that’s where she met Owen. Owen became the love of her life. There was just one problem with that and it was Owen himself. Owen was constantly in other relationships. Allison also dated other people. She came to love some of them although not as much as she loved Owen and she told Owen this one day.

She told him how she felt and he told her that he was in love with someone else. He had been in love with Cristina at the time. He went from Cristina to Amelia. He then told Teddy he loved her and that too posed a problem because Teddy was self-destructive. She pushed Owen away. She later wanted him back again and once she got him she again pushed him away.

Teddy hates what she did to Owen. She cheated on him with Koracick and she hadn’t known why she did that. It had taken the fugue state to explain it. Teddy has always felt that she was the runner-up-up prize with Owen. Owen wanted Cristina and he wanted Amelia. Both women dumped him and so he came running to Teddy.

Teddy cheated because she thought Owen will eventually do so as well. She loves him, but she never thought he truly loved her the same way and it didn’t help that their relationship was built on lies. Owen hadn’t known about Teddy and Allison. Teddy kept the fact she was bisexual to herself and she told him that Allison was just a friend. They even named their daughter Allison in honor of her supposed friend.

The truth was Allison was the great love of Teddy’s life. She named her daughter in honor of a dead lover and she kept that from Owen. She cheated on him in the weeks leading to their wedding. She humiliated him by butt dialing him while she was sleeping with Koracick and so he and an OR full people heard her having sex with someone else. Owen ended their relationship after that phone call.

He hasn’t spoken to her outside of work since the incident and him bringing her up home when he found her out of her mind was the closest contact they’ve had since the pandemic. Owen wants to help her because she was the mother of his kids. His kids have been asking for mommy and he couldn’t tell the truth because they were still babies and they wouldn’t understand. And he couldn’t let them see Teddy because he didn’t want them to see her so broken.

Teddy was broken. She has lost so much that she couldn’t handle any more loss. Teddy lost both of her parents in the same year and what got her through it was Allison. The morning Allison died, she tried to convince Teddy to sleep in with her and Allison told her no. She said she had to go to work. Allison also into work at the twin towers and she died because Teddy hadn’t wanted to slack off. This is how Teddy sees the past.

She thinks she’s responsible for Allison’s death and she blames herself for DeLuca’s death. She sees DeLuca in the state she’s in and she apologizes to him. She wished she could bring him back. He gets that and he doesn’t his death against her. It was his time. Teddy also needs to let go of the original Allison.

Teddy has been putting Allison on a pedestal. She’s been comparing all other relationships to what she had with Allison and the truth she is never got to have a relationship with Allison. They had an affair. Allison had been in love with two people and this wasn’t the last time Teddy has had to deal with this.

Owen was in love with two people. Hell, he strangled Cristina because he was suffering from PTSD and so he doesn’t get to judge Teddy. Amelia told him as much. Amelia and Teddy talked about whether Owen can forgive Teddy and Amelia thinks he should. She gets why he’s having a hard time dealing with the cheating, but he himself has done that to a woman he loves and so he couldn’t keep holding onto this anger. He’s going to have to forgive Teddy just like he forgave Amelia.

Teddy also needs to work on herself. Teddy lost her parents. She ran to Allison. She lost Allison and she ran to the Army. She lost Henry and she ran to Owen. She lost Owen and she ran to Koracick. Teddy only knows how to run from things and so she needs to take the stop to acknowledge the pain. She has to stop running. Her fugue state sorta explained it for her. Teddy became aware of the outside world and she ran to go check on her daughter.

Owen saw that she was up and moving.

And he was grateful that she was returning to her old self.