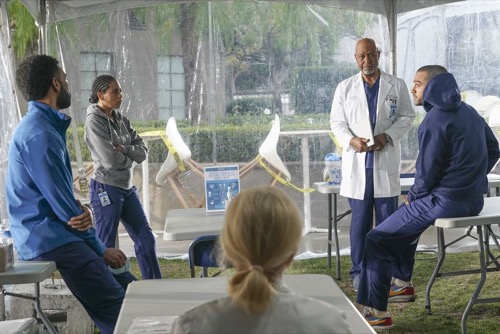 In tonight’s Grey’s Anatomy episode, Meredith lies in a coma. She hasn’t woken in weeks and her doctors don’t know how to help. Teddy was the main doctor in charge of Meredith’s health, but she had to step away to take her of her own mental health and so Meredith was left to others. Not that there was anything wrong with them.

However, there’s a pandemic going on. Richard told the doctors to treat their patients with literally anything and everything as long as they don’t put them on ventilators. He said ventilators should be used as the last resort. Meredith was on a ventilator. They have to change it out to fresh ones as often as they can and all the while Meredith was on her “beach”.

Meredith’s afterlife was the beach. She’s seen dead friends and family on this beach. She ran into Lexie and Mark who both told her that she gets to decide where she goes. She was the one in charge of the beach. She can leave at any time and right now she doesn’t seem ready to. She likes seeing the people she lost. She loved catching up with George. Flirting with Derek. And she even got to say goodbye to DeLuca.

Meredith was content where she was. She didn’t know what was going on in the outside world. At the hospital, Linc had come back from paternity leave to help out and he was glad to be away from the playdate. His girlfriend Amelia had agreed to keep an eye on Teddy. Their kids got to play together and Amelia got to help Teddy through her troubles.

Linc was glad not to be home when that happened. He and Richard worked together and unfortunately, there was a complication with their patient. They had to put him on the ventilator. It was their second to the last tone. The hospital only had one left and it had to be held for their existing patients and so Richard later closed their clinic.

They couldn’t accept any more covid patients. Which, luckily for a young woman named Veronica, happened after both she and her mother had been admitted. Veronica and her mother Marcella both have covid. They caught it after Veronica visited her mother for her birthday.

The two women wore masks and they were socially distant for most of the meal but then Veronica hugged her mother. She hasn’t been able to do that in months and so she hugged her mother because deserved one after being alone for so long. The hug was how one passed the coronavirus to the other. Marcella thought she gave it to her daughter and her daughter thought she gave it to her mother. Both women were feeling guilty.

Also, both tried to tell their doctors to focus on the other. Marcella wanted her daughter to be treated before she was and Veronica wanted Marcella to be treated because she was scared she might have killed her mom by giving her the disease. The newest intern, the oldest one, comforted Veronica. She was a mother herself and her daughter was also a doctor at the hospital and so she comforted Veronica the way she needed to be comforted. By a mom.

Veronica and Marcella were both going through something no one could have foreseen and Veronica’s condition was unstable. She was having breathing problems. She also stressed her already fraught condition by trying to get up and find her mom. And so she crashed.

Veronica crashed around the same time as her mother. Schmitt had been the doctor in charge of Marcella and he immediately bagged her. He thought he could put her on the ventilator, but by then, they had only had one ventilator and so that put the patient in a unique position because both she and her daughter needed it. Veronica was the one most likely to recover.

The protocols state that the ventilator should go to her and yet the doctors didn’t want to do that to Veronica. She will never forgive herself if she finds out the doctors prioritize her over her mother. Only her mother desperately needs that ventilator as well. She wasn’t breathing on her own because the doctors had to intubate her and at the same, the doctors couldn’t stand continually over to help her breathe.

Marcella will die the moment they step away. Dr. Ortiz the Senior thought the ventilator should go to the daughter because she knows that’s what the mother would want and so she justified her answer by turning to protocol. The other doctors couldn’t fight against protocols. They were going to use their last ventilator on Veronica because that’s what they had been taught to do and that decision genuinely shook Maggie.

If she knew she would have to decide between mother and daughter, she would have quit med school. She talked to Winston about it while they were on break-sharing earbuds and the earbuds gave her an idea. She wondered if it was possible to get both Veronica and Marcella to share the same ventilator.

Maggie and Winston later used a splitter. They put both mother and daughter on the same ventilator and the success of it showed that other patients could start sharing ventilators as well. This can help their supplies last until they get more ventilators. Elsewhere, Hayes was reliving her worst nightmare when his sister-in-law came in needing surgery.

Hayes lost his wife some years ago and his sister-in-law Irene has been a huge help. She was the one watching his boys. She was their aunt, coach, and therapist all rolled into one. Hayes needs her and that’s why he asked for the best doctor at the hospital to treat her kidney stones. He asked for Catherine. Catherine was great at what she does. She also knew how to handle a complication when Irene’s surgery took a nasty surprise.

Catherine was able to fix it all. Irene came out of her surgery healthy and with both her kidneys. Which might not have happened if she had been given a different doctor. Hayes was there when Irene woke up. The two laughed about her rejoining the living.

And later Meredith was well enough to come off the ventilator. She still hadn’t woken up because she was at the beach but she was improving and her friends and family celebrated the good news.

And there was more celebration to be had when Winston and Maggie got engaged.