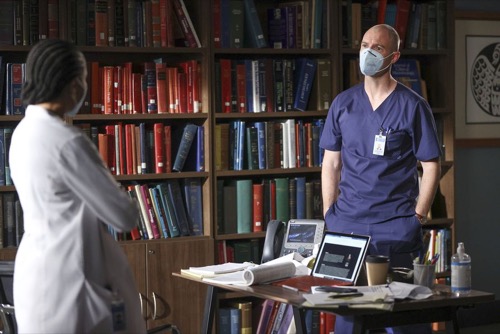 Tonight on ABC their hit drama Grey’s Anatomy returns with an all-new Thursday, April 8, 2021, season 17 episode 11 and we have your Grey’s Anatomy recap below. On tonight’s Grey’s Anatomy season 17 episode 11 called “Sorry Doesn’t Always Make It Right,” as per the ABC synopsis, “A newlywed couple is injured in a car accident; Jackson’s generosity with COVID-positive patients goes a bit too far; Hayes works to rebuild Maggie’s confidence and convince her to perform an extremely risky heart surgery.”

In tonight’s Grey’s Anatomy episode, Link’s parents came for a visit. They didn’t tell their son they were coming to town for a visit. They surprised him by just showing up one day and both Link and Amelia were so glad for adult human interaction that they welcomed them with open arms. The new parents were tired out. They have a new baby and they were also taking care of an additional three children. Amelia’s nieces and nephew.

They needed help with the kids and they were glad his parents showed up. His parents came to see their grandson. They haven’t met him before now because of the pandemic and so they quarantined in preparation for two weeks straight with no contact with the outside world. And now they were ready for hugs and presents.

Link’s parents were also known to embarrass him. His mother called Amelia her daughter-in-law. She said Amelia is already her daughter-in-law no matter how long Link was dragging his feet on proposing and so Link got away from his parents as fast as he could. He and Amelia took advantage of their empty house to relax. Well, he relaxed. Amelia broke out in tears once they were alone and so Link tried proposing to her but Amelia told him “no”.

She said she wasn’t crying about that. She was crying for no reason she herself understand or can explain. She was crying because she needed to. Link did his best to empathize and he held her as she cried. The two of them were taking their break from the children to let out all the pent-up emotions.

Over at the hospital, nothing has changed in Meredith’s care. She was still breathing on her own and her doctors thought she would have woken up by now and that hasn’t happened yet. Meredith was still unresponsive. The whole hospital was waiting on her to wake up and Jo was even practicing a speech for her. Jo was changing specialties. She was shifting from general surgery to OB/GYN because she said she needed something good in her life and babies can be that for her.

Jo was unhappy in her current position. She was treating a patient who came in with her husband and the two weren’t talking to each other. The patient, Karissa, had just gotten married a few hours ago when she got into a car accident with her new husband, Shayne.

Both of them had needed to be cut out of the car. Karissa freaked out when the firefighters assisted her husband first because she yelled out she should go first and that her life was worth more because she has family that will miss her while Shayne has no one. Shayne overheard the whole rant. He now wants nothing to do with his new wife and so he wasn’t talking to her. He also demanded that no one tell Karissa about his condition or the fact he needed surgery.

He told Jo that when she came to talk to him after Karissa requested that she find out. Karissa now regrets all the things she said. She wants to make up with her husband and she was denied every opportunity. Shayne was holding onto this grudge with everything he had.

Jo was the one caught in the middle. She had to run back to Karissa and tell her that Shayne’s medical condition as confidential. So, Karissa correctly guessed Shayne was ignoring her. She did something reprehensible and she couldn’t even claim her own health may she did that. She had a minor brain bleed but it wasn’t enough to cause her to say what she did and so her comments are all on her own. It had taken Shayne ignoring her for her to realize how much she’ll miss him if they break up.

The two got pretty serious after three months. They were dating when the pandemic happened and they decided to live together because they figured why not. And they were barely living together when they next came up with the bright idea to get married.

Karissa and Shayne’s whole relationship took place all in the span of three months. Her family told her not to get married and she didn’t listen to them. She thought she was ready. She and Shayne got married and now he regrets it while she doesn’t. Jo meanwhile was stuck in the middle. She went into Meredith’s hospital room and she explained the whole saga to her. She also told a comatose Meredith about her switching specialties.

Jo wanted to be wanted. She felt expectant mothers will more want her in the room than people who came in on their worst day and so, in the end, Jo didn’t need her speech. She told Meredith everything she was feeling. Jo wants to be around babies and sure there were going to be bad days. There were going to be sick babies, only she was okay with that risk.

Dr. Hayes works in pediatrics. He knows that sometimes babies are given an unfair disease or condition and his latest patient had needed help. Young Arthur was a newborn. He was born with a heart condition and he had needed to go on the transplant list for a new one. Arthur’s father was there every day for his son. His mom was at home with post-partum depression and so his father was taking everything on himself. It was Arthur’s father who agreed to the risky surgery. Hayes came up with this plan of removing parts of Arthur’s heart to put in a place a pump and it’s never been done before. Arthur’s family was taking a risk in agreeing to the surgery but they did it. It was either that or risk losing Arthur.

Thankfully, the surgery worked. It bought Arthur some much-needed time and he was going to be okay. Maggie hadn’t been sure about the surgery before now. She had needed to be convinced by Hayes to do it and so she was just so happy it was working that she thanked Hayes for seeing the path she couldn’t see.

Shayne later asked his wife for an annulment because he realized she was a deeply selfish person and right now she’s upset because she doesn’t like being dumped. She probably thinks she should have dumped him. But there’s no changing everything that leads to this. Owen had watched Shayne dumped Karissa and he realized that he needed to speak to Teddy. Owen isn’t sure if he can be with her after this, but he does know that he can be her friend right now and that’s all she needed.

Jackson also turned to the new intern known as “Momma O” and he asked her how best to put his deep pockets to use. He tried helping people on his own and it created more issues than solve them.

Meredith meanwhile woke up. She woke up and she told Richard all about Jo changing specialties. And so she was listening to everything around her.