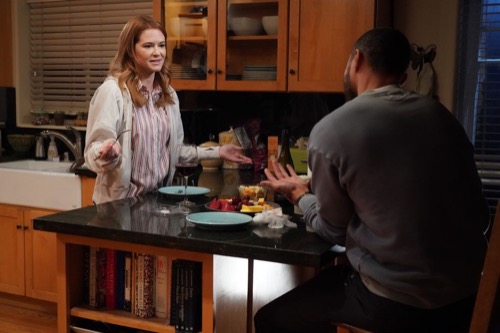 In tonight’s Grey’s Anatomy episode, the episode begins with Jackson, it is dark, he is driving, and it is raining. He is thinking and we hear him say, “it is a natural progression in any profession for the student to become the teacher, the mentee to become the mentor. It’s not that much different from parenting. We learn from our ancestors to make the perfect soothe to soothe an aching heart or aching head.

We measure milestones, percentiles, and first steps, to try to see the person they will grow into. As if a bunch of numbers on a chart are true to what we make of ourselves.” During this, we see Jackson make his way to Jefferson’s Grill to see his father. Back to Jackson in the rain, he stops by April’s house. Harriet is sick, she has a fever. Jackson holds her and tells April to go have a shower, he will take care of her. All of a sudden, the power goes out

His father asks him if everyone is alive, Jackson says yes. He asks him how his little girl is, Jackson, says she is 3 ½ and her name is Harriet. Jackson says he is there for answers. His father says he has to put lunches together, so if he wants to talk, he has to help him. Jackson sees his father’s system for making the lunches, he tells him that he will help him, he just wants answers. Jackson says his mom told him that he sounded like him when he said that he really can’t see change coming from inside the foundation, there is too much bureaucracy.

His father says he hasn’t thought about the foundation in a long time. His father says the good thing about living where he is, people just see him as Robert who makes lunches, they don’t know he comes from money. Jackson asks him what his dad thought when he walked away. He says he told him that he was lazy and wouldn’t speak to him, he knew he wasn’t going to be the son his father wanted because he couldn’t be the man the role required. Robert turns to Jackson and says that is why he is here; he is ready to leave it all behind.

Robert tells Jackson that he prepares lunches for the locals to keep him occupied during COVID. Jackson says he feels stuck like there are two of him. A successful surgeon that he works so hard to become and push the foundation to become more progressive, and also just a guy who didn’t ask for any of this. Maybe it is too late, the system is beyond repair. His father tells him maybe he can let go of wanting to save the world. Jackson asks if what if, what if he chose differently. Robert says he is a never look back type. Jackson asks him why he left, it messed him up badly, made it hard to maintain relationships, wanting to always run away. He just kind of doubles down on wanting to be the best at everything.

Jackson goes back to cutting the meat for the sandwiches and gets irritated when his father is just staring at him, he doesn’t pay attention and cuts his hand on the machine.

Harriett has a bad dream, April asks Jackson if he knew Matthew wasn’t going to be there tonight. Jackson says he is fine with Matthew, they are civil together. She asks him what he’s considering to run the foundation has to do with her. He says he is not just considering it, he is doing it and that means he has to move to Boston. He says he is moving to Boston and he really needs her and Mathew to come, the foundation will hire them, they can do anything they want. He would never leave Harriett, which means he needs them to go with him.

April is surprised, she tells him that he has always tried to run away from his family. Uprooting her entire life is more than an inconvenience. She asks him what happens when he regrets it when he hates it if it doesn’t work. Jackson tells her that Matthew got down on one knee and proposed to her in front of him and he has had her back every day. He knows this is a surprise, but he just asked her to do the same for him. She says she wants him to be happy, but running the foundation, he is not that guy and she doesn’t think he ever will be. Jackson says so that is it, he is just going to fail.

She tells him that he is a brilliant surgeon, he has left his mark on the operating table and it has made him exceptional. She says she is happy, she is helping people. He says he not trying to diminish her work, and Matthew will follow her, that is why he likes him so much. She says he didn’t always have her back, when she found what she did in Jordan, she went alone. He says he is not running from something, he is trying to run to something, to make it his own. She says it is not fair. He asks her if she had a chance to make it all make sense, would she try to do it. She says she did, he says that is all he is asking for. The lights come on and Harriett wakes up, but the good news is, her fever is down.

We see Jackson with his dad, they are enjoying a coffee outside together. Robert says he is thinking about their last visit. He is there because life here doesn’t require much of him, he can walk away any time and he was convinced that he would be better off without him. Jackson gets upset, he says there are many times in life where he needed a father. Robert says in his father’s eyes he was a screw-up and he didn’t want to pass that on to him.

Not one day has passed that he hasn’t regretted leaving him and he knows that an apology will never make up for it, he will never get over it. He knows that he will be ok, no matter what he chooses. He tells Jackson that he is not here, he is committed, to his work, his family, and people in need. Robert says he was scared, scared to do the right thing. Jackson says he is scared, but Robert says it is different, he is scared of doing the wrong thing. He tells him if he doesn’t want to stay, don’t blame it on him because on his worst day, he is ten times the man he is.

Jackson stops by his mother, he tells her that he wants to take over the foundation. He wants to reallocate every penny they have to medicine; women’s health, trans health, and racial equity. He wants everyone who this country abuses to be served. She is so happy, he says he is back and he knows where he belongs.

Jackson goes back to see April, Harriett’s fever is gone. He tells April that if her dream is here, he will give up everything. She tells him he doesn’t get to do that, she is saying yes, they will make Boston work. She tells Jackson that she and Mathew split up. Ultimately they learned that life isn’t always so tidy and God’s plan is not easy to understand. He is in Philadelphia with Ruby and they are not coming back. She says fingers crossed for new horizons. Jackson hugs her and says thank you.