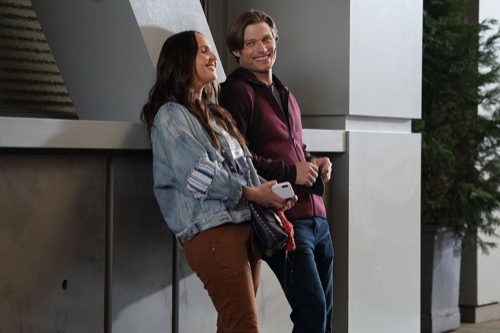 In tonight’s Grey’s Anatomy episode, Koracick is gone. He went to go fight racial inequity and to make the world a better place. In his absence, it was Amelia who took over. She was back at the hospital and she was now in charge of Koracick’s patient list as well as her own. Amelia has been away for months because of maternity leave and so she felt happy about being back. She couldn’t wait to leave domestic bliss.

The kids now have their real mother back and Link was there to watch their son Scout when Amelia is busy. Amelia’s home life was set. She had everything handled there and so relearning how to handle everything back at the hospital was going to take some time. Amelia has to deal with patients. She has to deal with patients’ families and so there’s a lot on her plate right now. Amelia has to do plenty of stuff and she has to be good at all of them.

Elsewhere in the hospital, Schmitt took the first vaccine as part of the vaccine trial. He loved that he could be helping put an end to the pandemic and it didn’t hurt that it gave them the excuse he was looking for to avoid his boyfriend. Schmitt was dating Nico. Nico wants to be with him and he made space in his life for Schmitt. He also asked Schmitt to live with him. He asked and Schmitt walked away.

He hasn’t told Nico what he’s thinking. Not then or now. Schmitt doesn’t know if he wants to see other people or if he wants to move in with Nico and so he’s stuck in indecision. Schmitt couldn’t ask Jo for advice. He upset her enough by inviting Hellmouth to live with them. Hellmouth is at least a good cook. She makes the meals and so Jo willing to tolerate her but it wasn’t up to Schmitt to invite more people into the loft.

It was Jo’s job. Jo was considering another little person to live with them. Jo became close to a baby girl named Luna and Luna has been in the hospital since birth. Her mother died. Her father signed off his rights. Luna was in the care of Children Services. They come by to sign off on documents and they never check on the kids. The Social Worker didn’t even look at Luna. She looked at Luna’s file and it was soon off to the next one.

Jo thought Luna deserved better. She wanted Luna to have the love and care of a mother and so she talked about it with Link. Link knows that Jo wants to adopt the baby. He asked her what’s holding her back and Jo doesn’t know. Jo was close to Luna because she had been close to Luna’s mother.

Luna’s mother struggled for years to conceive. She lost her marriage and she was at a low point when she had a drunken one-night stand with a guy she didn’t care about and that’s how she got pregnant. The pregnancy wasn’t easy. Luna grew outside of the womb. Like an ectopic pregnancy and yet Luna was born alive while her mother’s liver was ruined. Her mother later died from her injuries.

Jo was all that remained for the little girl. She’s become invested and now she wants to be a parent. Luna later crashed. She almost died and Jo had almost died as well. That feeling, when she thought she would lose Luna, that pushed her to realize that she was Luna’s mom already. Jo stepped up. She announced she was the mom and she was there for Luna as much as she could be.

Then there was a patient who was treated. The patient was named Gwen Yates and she received a heart transplant but she didn’t want to leave the hospital. She kept making up symptoms so that she could stay. The doctors eventually realize this and they knew why Gwen didn’t want to go home. Gwen’s husband recently passed away. She got a dog to help combat loneliness and then the dog ran off during a storm and Gwen couldn’t chase after him because she was ill at the time. Well, the doctors treated her illness.

They also talked to her and they became friends and that’s why Gwen didn’t want to leave. She said her husband was better at making friends. She didn’t want to go home to an empty house and have no friends. And so the doctors had to calm Gwen because they all liked her. She was like a mother but with no drawbacks. She wouldn’t say someone looked green because of the shade of their lipstick.

Gwen was a good person. She needed friends and so did some of the people at the hospital. They found Gwen’s dog. They gave her their phone numbers so that she could call them whenever she needs to talk and that wasn’t the only thing changing. Schmitt was getting flirty with the doctor that gave him the vaccine. He was asked to come over one night and he was tempted to take up the offer.

He still doesn’t have a decision for Nico, but he was open to trying new things and that included being with someone new. Someone who convinced him to bike to work. Someone who convinced him to get a haircut in the middle of a pandemic and that someone was Nico. Schmitt went to his house and he saw that Nico lit up a bunch of candles for him and that he’s been doing every day on the off chance that Schmitt comes over. And he fell in love.

But Jo’s adoption application was denied. She couldn’t be Luna’s mother and again Jo’s heart was broken.

Maggie and Winston discussed their wedding plans and they don’t want to settle on something that doesn’t feel right or that doesn’t honor their mothers who’ve they both lost. And so they were going to have the smallest wedding in the world.