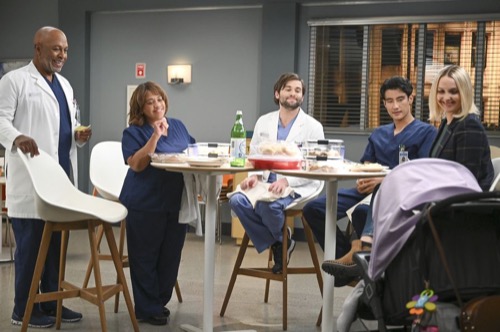 Tonight on ABC their hit drama Grey’s Anatomy returns with an all-new Thursday, November 18, 2021, season 18 episode 6 and we have your Grey’s Anatomy recap below. On tonight’s Grey’s Anatomy season 18 episode 6 called “Every Day Is A Holiday (With You),” as per the ABC synopsis, “It’s Thanksgiving and while Meredith faces travel complications due to the weather, Nick steps in to help in more ways than one. Meanwhile, Richard and Bailey seek out emergency surgeries, and Amelia and Link reconnect.”

In tonight’s Grey’s Anatomy episode, it’s the holidays. Meredith’s lab was closing for the holidays and she wanted to use the time to see her children. Amelia flew earlier than Meredith. Her flight went off without a problem. But Meredith’s flight was scheduled and by then there was bad weather. Meredith tried to get another flight. She just couldn’t get one willing to risk the weather.

Meredith was grounded and she was going to miss the holidays with her family. She called them to tell them the news. Her children took it really well. They still had Amelia and Amelia’s son was also spending the holidays with them. Amelia herself on the other hand was going to be frazzled with watching four kids and so she asked Linc to stay when he came to drop off their son. Linc was also watching Jo’s daughter. He agreed to stay and all in all they watched five kids while trying to cook dinner.

But at least they weren’t at the hospital. The holidays were usually the worst and surprisingly this year there weren’t a lot of patients. Schmitt’s mother also showed up. She didn’t want her son to go without Thanksgiving dinner and so she packed it all into a cooler and brought it down to the hospital. She thought Schmitt would be glad to see her. He was instead embarrassed.

He couldn’t believe his mother came to the hospital to feed him and he ran away from her the first chance he could. He got lucky when a patient landed in his lap really. A pregnant woman came in not feeling well and was vomiting. She wasn’t in labor. They called down Jo and Jo checked her out. They did an MRI because that’s safer for the baby and they found her appendix ruptured.

The woman was so pregnant. So, the appendix was pushed up into her abdomen because pregnancy rearranges a woman’s organs and so she needed to be rushed into surgery. They had to deliver her baby. They might even have to remove her uterus. Ashley was pregnant with her fifth child and she told them that if they don’t have to remove her uterus – she still wants them to tie her tubes.

She was done with having children. She never planned on a fifth child much less a fourth, second, or third. She said birth control always seemed to come up when it was too late. Jo along with Schmitt and Richard was in the OR when they removed the appendix. The baby went into distress and so they had to remove him quickly.

They delivered Ashley’s baby. It was a healthy baby boy. He was fine and Ashley was not. They couldn’t stop the bleeding. Ashley was struggling and the doctors were trying to help as elsewhere in the hospital Farouk took a turn. Farouk was still in the hospital following his surgery. His mother Megan stayed with him. Teddy also stayed nearby because she was working on the day. She wanted Owen to go home to be with the kids and his mother, but he chose to stay at the hospital after a chronically ill patient asked him to watch his son. He didn’t want his son to see the tests and be reminded of the illness during the holidays. And so Owen chose to stay at the hospital for the purest of reasons.

But he forgets about his own. His son Leo likes to wear dresses. His mother is not entirely understanding of that and she has been known to change him into boys’ clothes if she’s around. Teddy wanted to be there to support her son. Megan understood and Teddy was thinking of cutting out early when Farouk took a turn. He flatlined. He was going to die when Teddy began performing CPR and Hayes came in. Hayes didn’t waste any time in trying to save the boy’s life. They were still working on Farouk as Bailey finally let go of her own anger. Bailey and her husband Ben agreed to take in a little girl whose mother abandoned her and whose father died. The little girl was Pruitt Miller.

Bailey loves the little girl. They took her in after her father died and Bailey wanted to keep her. But’s Pru’s grandparents had just lost their son. They didn’t want to give up their granddaughter. Bailey feared this would happen. She wanted to give in to her grief and her husband wanted to fight. Ben thought they should fight for the little girl. Bailey was still figuring things out when she met a woman coming apart and she chose to be stronger for her. The woman later left with her family and Bailey returned to her office to cry. Richard later found her. He had just performed an emergency hysterectomy on Ashley. Ashley was doing fine and Jo went to go tell the husband the good news. Schmitt went to have Thanksgiving dinner with his mom.

She had just eaten dinner with Nico. She told Nico how she couldn’t wait until he and Schmitt got married. She even discussed baby names with him. She wants a grandchild named after her mother. His mother ran off. But she left a lot of food. Schmitt decided to share it with Jo, Richard, and Bailey. Bailey came around to the holidays after she had talked things out with Richard.

And Meredith spent the holidays Nick. The two slept together and they’ve taken a step towards a relationship.

Amelia and Linc also slept together. She told him she hasn’t changed her mind about getting married and he didn’t care. And they still slept together. But Farouk was brought back. He’s still alive and now he needs a heart transplant.