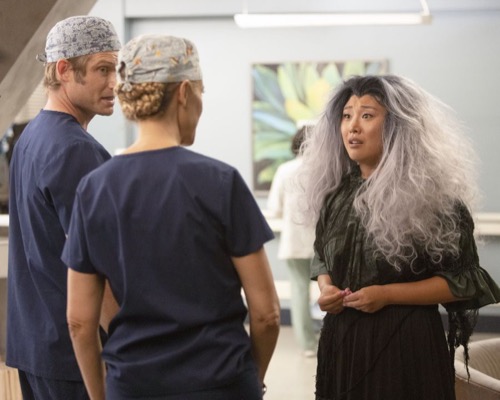 Back in Seattle, Link and Jo take their kids to a fairytale theater performance that goes wrong. Bailey and Dr. Lin attend a recruitment fair in hopes of attracting more doctors to Grey Sloan but find themselves ill-prepared.”

In tonight’s Grey’s Anatomy episode, Meredith was forced to stay in Minnesota because of Hamilton. Hamilton’s Parkinson was developing quickly and he broke his hand after suffering paralysis in his foot. This was unacceptable to Hamilton. He demanded that Meredith and her research be ready for surgery. She told him that they weren’t at the stage yet. Hamilton didn’t take it well and so he issued an ultimatum. He said either she is ready for surgery by the end of the day or he was pulling the plug. He was willing to risk everything and that is literally everything because research is how people remember doctor’s names much less gain notoriety and still this guy was willing to risk it because he broke his hand. And so Meredith was finally having enough of this overgrown man-child.

Meredith missed Thanksgiving. She doesn’t also want to miss Christmas with her kids. They were used to spending a lot of time away from their mother because she worked through the pandemic and then she herself got sick. But they do expect their mother to be there for them during the holidays and there’s no greater holiday for a child than Christmas. Meredith was considering walking away from the project to be with them. Amelia told her to stop and think about it. They were doing ground-breaking research for a cure to Parkinson. They couldn’t just turn their back on it. Meredith had needed a breather and so she took a break. Amelia meanwhile stayed behind. She was too busying flirting with one of the women she works to get angry at the lack of progress.

Back in Seattle, Bailey was visiting a Med School’s fair. Bailey’s highlight of the event was supposed to be Meredith and it instead was no one. She didn’t have the legendary Meredith Grey. She didn’t even have Owen. She just had the new doctor and the kids didn’t want her or Bailey. They wanted free gifts. Everyone else was delivering on the swag by offering massages or pizza. There was one medical school that was even offering a raffle ticket for a free laptop. The med schools was also offering a wellness program for residents because they just came off a pandemic and the kids weren’t the same after that. Grey Sloane wasn’t offering a wellness program. They just had their own program which was rated one of the top ten in the country and that’s why they didn’t see the need to change.

Jo and Link meanwhile saved a life. They both had a day off and so they went to the park with their kids to watch one of the plays for children and a guy fell during his climb up the hair in “Rapunzel”. He had a heart condition. He has also had a broken leg from the fall and so the two saved his leg. They also kept him breathing until the ambulance arrived. They had him transferred to their hospital and they later learned that the young man who they saved had a friend. A best friend. A female best friend. She was secretly in love with him and she was the only family he had close by. Jo was Link’s best friend. She wasn’t in love with him. He was also still pining after Amelia and so it sucks that Amelia has already moved on.

Over in Minnesota, Meredith decided to scrub on a surgery to help get her groove back. It had been Nick’s idea and he was glad to have someone of Meredith’s skill to do the surgery. But he failed to mention the patient was a friend. His best friend since he was five and who donated a kidney to him. Nick didn’t say anything because he had wanted to be in the OR during the surgery. He went in and was watching them up close when a few of his remarks that questioned Meredith’s judgement made her realize something was up. She asked Nick to step out of the OR. He was confirmed it was his best friend and so she very clearly told him to step out of the OR. He shouldn’t be there as they perform life or death surgery.

Amelia also made a breakthrough in their research. They got over ninety percent effectiveness and Hamilton ended up regretting yelling at Meredith. He only reacted the way he did because he fell when his granddaughter and it scared her. She was just twelve. She didn’t know that her grandfather was sick or that he couldn’t control his movements until that morning. Hamilton was glad about the breakthrough. He was apologetic and Meredith was glad to hear it. Her surgery was a success and so that cheered up Nick. The two talked it out. He thanked her and they moved on. Back in Seattle, Jo found out that Link had a crush on her when they first met and she ignored him by setting him up with someone else. And she went on to marry Paul.

Then she married Alex. Now, she’s alone and she thinks about what if? What if she had known Link had a crush on her?

Meredith meanwhile returned to Seattle and she brought along a resident. A resident that had Bailey believing in people again after her disastrous day at fair and so it’s a good thing Meredith came along when she did.