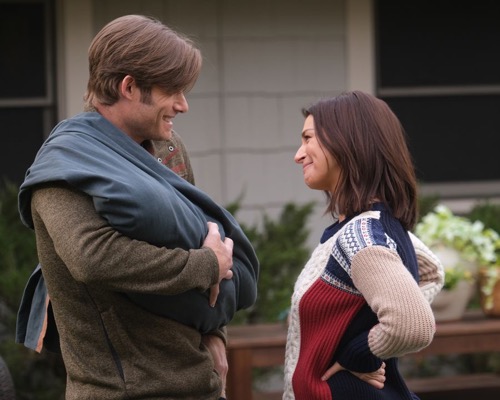 DeLuca was rushed to the hospital with a stab wound. He helped take down a known sex trafficker and unfortunately the job wasn’t done without cost. DeLuca was stabbed. His sister had been in the area and so she rushed to his side and she called for help. She was with him in the ambulance as he was transported to the hospital. Carina watched as her brother was in and out of it and so she became his chief defender.

She tried to tell the EMTs what to do. She warned the doctors at the hospital that her brother was injured and he eventually passed into Owen’s hands. Owen and Carina have history. She told him that her brother couldn’t die and he told her that they’ll do everything possible to save his life.

DeLuca was one of their own. He was an amazing doctor and they were all going to work to save his life. Even Ben was helping. Ben was technically no longer a doctor at the hospital because he left to become a firefighter and yet he still was lending a helping hand. He was now a trained EMT and he had been the first to treat his friend.

Other doctors were helping as well. Richard went running to the Emergency Room when he heard about DeLuca and he did that because it was DeLuca who saved his life. DeLuca properly diagnosed Richard with cobalt poisoning. The other doctors had thought he was suffering from Alzheimer’s disease and so DeLuca coming in with the save had literally saved Richard’s life. He would have been sent to a care home without him.

DeLuca’s condition was unstable. He passed out and he soon woke up on a beach with Meredith. It was a waiting room of sorts. Meredith has been there for a while and she’s seen people she’s lost. She saw Derek. She saw George and now she was seeing DeLuca. He, like her, was between life and death. They were still alive and so they weren’t worried. Only there wasn’t much to do at the beach.

They skipped stones over the water and they talked. They haven’t really talked since the pandemic began because they were both so run off their feet and “the beach” now gave them a chance to catch up. DeLuca told Meredith about what happened. He probably also brought up his sister. DeLuca had always wondered why their parents split them up and so Carina finally explained what happened all those years ago.

Their father as it turns out hadn’t wanted to give up the kids. He was demanding that they stay with him and Carina couldn’t let that happen. Their father was unstable. He has a mental disorder that affected his moods and he never got treatment for it. Carina hadn’t wanted such a man to be in charge of her little brother. She told her mom to take DeLuca to the States and she stayed with their father.

Carina knew that she could handle their father’s moods. She, therefore, signed off living with him as long as her brother was protected and, all this time, DeLuca hadn’t known. He just found out. DeLuca was so grateful for his sister. He loves her and he wouldn’t be the man is he now without her.

Neither of them wanted to lose each other again. Carina lit candles for her brother in the chapel and she prayed for him. She prayed that he would survive his surgery. Richard prayed, too. Schmidt meanwhile blamed himself for what happened to DeLuca because he met Opal the sex trafficker.

She came into the hospital claiming to be a victim of a mugging and the truth she came in to see if an old partner of hers was spilling their secrets to the cops. Opal hadn’t raised any alarms for Schmidt. She had asked him questions about two girls who had been rescued and he had thought that was curiosity. He even answered her questions. Schmidt had the opportunity to call the cops on Opal and he hadn’t used it and now he’s blaming himself for the fallout.

Schmidt turned to his boyfriend for his support. He was hoping for a pep talk and instead his boyfriend told him not to work on DeLuca while he was panicking. Schmidt later asked another intern to step in for him. The other intern had to work alongside both Owen and Teddy. The two haven’t been working together since they called off their engagement and ended things, but Owen had needed an experienced hand to save his friend and so he put the past behind him to work with Teddy.

The surgery was probably the most time the two had spent in each other’s company since Owen learned Teddy was cheating on him with Koracick. Teddy hasn’t been doing well since the separation. She was struggling with loneliness. She couldn’t really talk with Koracick because he was fighting Covid in the Covid unit and she couldn’t talk to Owen because he hasn’t forgiven her yet.

Teddy and Owen did surgery together. They worked together as they did in the old days and, for a while, it was great. They saved DeLuca’s life. They stopped the bleeding in his chest. He left the “beach” and he woke up in his hospital room with his sister Carina by his side. Teddy and Owen did a great thing and then it was over. Owen told Teddy that the surgery changed nothing for him.

He still hates her and so she needed someplace to vent. She visited Koracick again. She tried to tell Koracick that she loved him and Owen both, but he called her out on that lie. He saved if she had truly loved him that they would be together right now. She didn’t love him and that’s why she’s not choosing him. She just choosing not to be alone anymore and Koracick deserves better than that.

Teddy was later paged by Owen. Their patient had taken a turn for the worse and so DeLuca was rushed back into the OR. Jo was also going through a situation with her own patient. Her patient Val was a new mother. She had just had a baby after going through a full ectopic pregnancy as in the baby was attached to her liver and so her liver was compromised when the baby was delivered via C-section.

Val later died. Her baby daughter was in an incubator and had no other support. The baby’s father hadn’t hesitated in signing over his rights. He wanted nothing to do with the baby and so he wasn’t going to be any help now. Baby Luna was on her own. Jo and Hays were both going to try to get her through her own current condition.

DeLuca however was touch and go. He went back to the beach and he spoke with Meredith again. He told Meredith how much she inspired him. DeLuca also acknowledged that he had expected her to love him at a time in which he hadn’t loved himself and so the two said their goodbyes. Meredith even told him that she will miss him if she goes back but he doesn’t. DeLuca then saw his mother. His dead mother and he went running into her arms. DeLuca left the beach with his mom. And he died in the outside world.

They called his time of death and everything