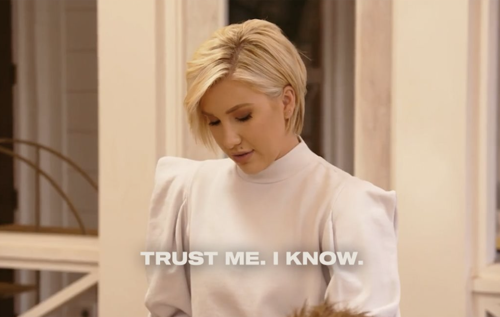 In tonight’s Growing Up Chrisley, there’s been a lot of bumps in the road as Savannah created her cosmetics line. She was forced to change manufacturers after the first company put “assy” and not “sassy” on the box. Savannah gave the defunct ones to Chase so that he could give them to his girlfriend. However, Chase didn’t want to give his girlfriends those ones. It said “assy”.

He didn’t want to give her something that could be seen as an insult and so Elliott suggested hawking it online. He said they could sell the messed up ones for a song. He said this plan out loud in front of Savannah and she shot down the idea. She didn’t want her makeup to be out there without her say so. Savannah wanted everything to go perfect for her launch.

Savannah wasn’t even going to throw a party. She said she was launching online and that’s where her focus should be. Her father disagreed. He knew how much Savannah would love a party. He thought they should have one and Savannah said no because there was just too much to do. Savannah still had photoshoots to do. On the set of one of her photoshoots, Savannah found one of her outfits had melted because it was left near the steamer and she forgot to turn off the steamer. Savannah said she was cursed. She’s deal with faulty packaging. A ruined outfit at a photo shoot. She, therefore, came to the conclusion that she shouldn’t have a party because something else might go wrong.

Savannah’s parents disagree. They think they should have a party to celebrate all of Savannah’s hard work in making it this far and so they kept trying to convince her to have a party until she did. As they were doing that, Chase was dealing with his roommate.

His roommate and friend Elliott doesn’t always think about things. He sometimes lives in his own world. The two of them were talking about a man cave and how it should be very adult-like because they were getting older but then Elliott buys a mechanical bull and he does behind Chase’s back. Chase had no idea about the bull until it was being delivered and he had to help bring it inside. They brought it inside. They inflated it and their room was too small.

Elliott claims to have done measurements. Somehow in his measurements, he didn’t see how the inflatable pin would burst if they put it at its maximum while indoors and so Chase convinced him to put the bull outside. It fit outside. They put it by the pool and Todd who came by for his frequent visits saw it. Todd couldn’t believe they got a mechanical bull. He thought it was dumb.

Yet, he still watched the guys ride it because he loved to laugh when they fell off. The family later gathered for Savannah’s party and Savannah loved having them. She loved being able to show off her good work. She and her family had fun. Nanny Faye had a few drinks and started swearing like a sailor. And so the highlight about that was that she was doing while working a lipstick designed by Savannah.

After Savannah had her party, the family gathered at Chase’s new house and he got to show off his man cave. The man cave looked great. The family also had happy news to celebrate because Savannah’s sales have been doing amazing and so now she can branch out into other things. Todd reminded him that she didn’t want to be a one-hit-wonder.