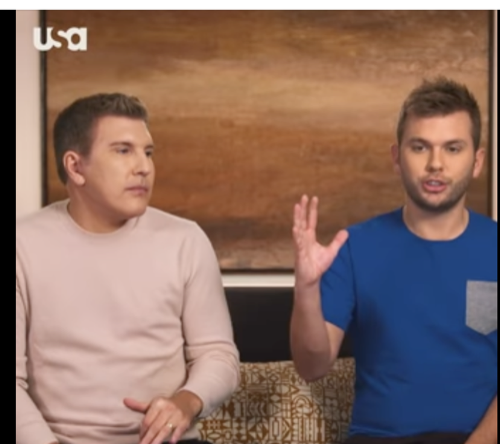 In tonight’s Growing up Chrisley episode,  Chase is about to take his test for a real estate license. He’s failed the test twice before and he doesn’t want to fail it a third time. Chase has been getting pressure from everyone to pass this test. He’s been getting his dad, his mother, and even his girlfriend. They all want Chase to succeed. Todd has been telling Chase to get his license for years and now Elliott was also telling Chase to do it. Albeit, in his Elliott way.

Elliott was also taking horseback lessons from Savannah and he was also telling her how boring she is what with never partying or going out because she was almost getting married and focusing on starting a business. Elliott was just that friend that was bluntly honest. Sometimes it worked and sometimes it didn’t. it didn’t work for Chase.

Chase developed insomnia because he was so nervous about his test. His roommates tried to be there for him and so they did everything to help Chase sleep. Chase sleeps best in the cold. They turned up the air conditioner and still that wasn’t enough to help him sleep. Todd, therefore, stepped in. Todd was trying to be a supportive father. He told Chase he was going to help him and that wouldn’t involve an acupuncturist.

Todd turns to needles when he himself helps needs to relax. Only he has other alternative and holistic approaches. He took Chase to a cupping session and that’s when cups on placed on the back and it sucks up the skin to the point the blood rises to the surface. Todd had told Chase that it didn’t hurt and that had been a lie.

It hurt. It hurt a lot. Chase was in terrible pain and it didn’t relax him in the slightest. He still couldn’t sleep from the nerves about his test. He later just gave up and went to hang out with his Nanny Faye. His grandmother was one of his best friends. Chase and Nany Faye were always up to something together. He told her about the cupping sessions and her response was that she didn’t need to know about his sex life.

He had to explain exactly what cupping was before she understood it. He also should her the marks on his back from it. Faye had said it looked like a hickey and she said she gave the best hickeys back in the day. She was once known as the “Mouth of the South”. Which if nothing else made Chase crack up. Chase eventually relaxed and just by relaxing he was able to go back to sleep again.

Chase’s sleep patterns weren’t fully back to normal. He was actually up early when Savannah called him and asked for his help. Savannah has tried relaxing. She went partying and she even went to brunch the next day to cure their hangovers but then Elliott’s car died and Savannah found herself stranded. She had needed a ride because she had a business meeting.

She called her brother and he gave her a ride so that she wasn’t late for that meeting. But Savanah has learned her lesson. She much rather be boring and on time for everything than be exciting and dealing with a hangover by having brunch when what she really needed was sleep.