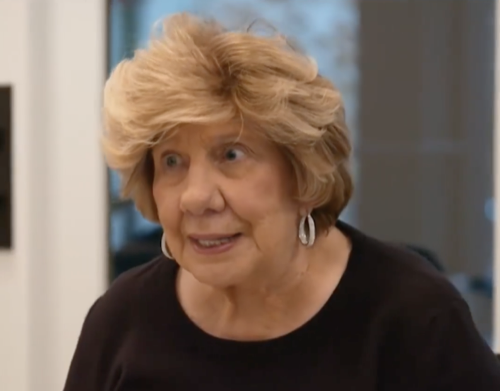 In tonight’s Growing Up Chrisley episode, the kids were hanging out with Nanny Faye. They went to lunch and Savannah mentioned her fear of public speaking. She usually likes attention. But not this kind of attention. Savannah was worried about her pronunciation because she does have her accent and she has pronounced certain words wrong because of it.

Her grandmother tried to give her some advice. Nanny Faye said just said “hard word” if she can’t say it correctly and Savannah said she couldn’t do that because she recently launched her own business. Savannah was deeply worried about public speaking. She was dreading it and so Nanny Faye came up with a suggestion. She told Savannah to do a public speaking class. Nanny Faye even went with her.

They went to the class. They learned proper exercises and Nanny Faye took to it instantly. Savannah on the other hand did not. She floundered in the class. She couldn’t see fathom how her grandmother made it all look so easy and Nanny Faye didn’t know how hard it was for Savannah. Chase in the meantime was making adult decisions. He got his last house with assistance from his parents and now he was ready to get his own home.

He saved up his money. He can now afford his own home and so went to look at places with his mom. His mom mentioned he should look at houses with a future because he was going to get married one day and so that gave Chase an idea. He realized that he should propose to his girlfriend Emmy.

Chase instead bought a ring and he showed it to his mother. It turns out Julie was speaking about his future as in down the road. She didn’t think he should get married now and she told him he made a mistake because he spent half the down payment on his house on a ring. He should have gotten the house first and the ring second.

If she had given herself more time to get to know her former fiancé, they wouldn’t have gotten engaged. Savannah was later in for another surprise when Nanny Faye arranged for Savannah to practice public speaking by speaking to a crowd of naked people. Nanny Faye did this because people are usually told to envision the crowd naked in order to feel more comfortable speaking.

This way she doesn’t have to use her imagination. Nanny Faye called upon her friends from the nudist colony and Chase was also there. He was the only one in the crowd that was dressed. Savannah spoke about her makeup line to the crowd. She was able to answer questions without feeling nervous and so Nanny Faye actually helped her by arranging this.

Savannah felt confident about speaking to the crowd. She now knows she can do the interviews about her makeup line and so Nanny Faye’s naked friends helped. Chase’s situation also worked itself out. He returned the ring and he got the money back. He was now going to put the money towards the house he plans on buying.

Chase lost out on the house he really wants because it went under contract while he was buying rings but he’s still looking and now he has priorities straight.