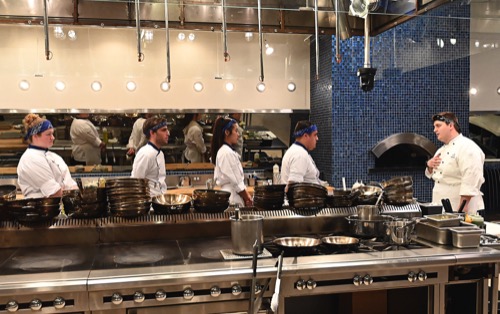 Tonight on FOX their Gordon Ramsay culinary competition series Hell’s Kitchen airs with an all-new Monday, September 13, 2021, season 20 episode 16 finale and we have your Hell’s Kitchen recap below. On tonight’s Hell’s Kitchen season 20 episode 16 episode called, “The final two chefs will pick their brigades from a pool of their former competitors and compete in their final dinner service, after which the last chef standing will win the grand prize title of Head Chef at Gordon Ramsay Steak at Paris Las Vegas.”

In tonight’s Hell’s Kitchen episode, Trenton received the highest score so he gets to choose first who he would like in his brigade, he chooses Kiya. Megan chooses Steve and he is thrilled to be Megan’s first pick. Trent then chooses Antonio, Brynn, and Sam. Megan then chooses Victoria, Emily, and Josie.

The chefs are speaking to their brigades for their last service. The teams prepare samples of their dishes for Gordon and Megan finds out that her chicken is overcooked, overall he says her team did a good job. Trenton finds out that some of his dishes lack seasoning and are not cut properly. Kiya says he is just nit-picking, but this is the finale. At this point, the two chefs just need to get into the zone.

Gordon calls Megan and Trenton to the dorm to see Gordon. He shows them a bag with packets of drugs, the two deny it. He was only joking, it is their final jackets. Megan was on the verge of tears, Trenton looked terrified. Gordon then sits with the two and tells them he feels like a father and he is very proud of them. He tells them to own every ticked, take charge.

He takes out a briefcase and inside it has a quarter-million dollars in it, this is what is at stake. He reminds them that it is their brigade, their menu, and their kitchen tonight. Their families are sitting with the guests in the restaurant. Gordon wishes the two the best of luck, it is time to begin the final dinner service that will determine who wins Hells Kitchen.

Both kitchens have a good start. Kiya says she hates Trenton, but she is going to give it her all. Trenton is confident that they are going to finish off strong. Jason is in Trenton’s kitchen, Kiya is super frustrated because they are rushing her and she doesn’t want to end up raw chicken. Trenton then calls up everyone and tells them that the chicken is undercooked. In Megan’s kitchen, Josie thinks she is going to nail meat, she has practiced and she feels confident. Josie really sees Megan winning this thing.

Gordon finds a piece of meat that is overcooked, Josie has to redo the rib eye. It’s an hour and a half into dinner service and Josie’s rib eye is undercooked, Megan switches Steven with Josie on the meat station. With Steven stepping up, Megan is finally sending out entrees. Back to Trenton’s kitchen, he is trying to finish off strong, he wants to walk through that door.

Kiya’s chicken is undercooked again, she has to end her chicken back to the pan. After giving her chicken to Trenton, it is still undercooked in the middle. All of the brigades don’t know what is up with Kiya. Trenton takes them back to the storage room and tells them off. They return to the kitchen and entrees are now leaving both kitchens. The service is over, the guests are filling out their comment cards.

Gordon tells them that this was a rough service, he has studied all the cards and he is announcing the winner right now. He opens the case of money again. The returning chefs say goodbye to Megan and Trenton. He tells Megan and Trenton that they worked really hard and rallied their brigades really well.

Gordon calls the chefs to infamous doors, he gives them a pep talk first. They step in front of the doors, the chef whose door opens is the winner, and it is Trenton.