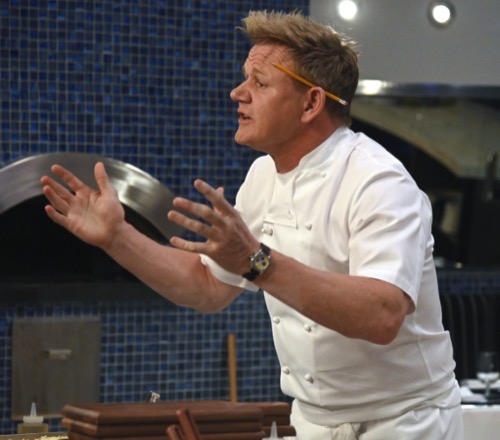 As a further incentive, the winner of the challenge also receives a punishment pass from Chef Ramsay to be able to skip a future punishment. Then, both teams are put to the test as they take on their first dinner service with the most expansive menu the show has ever seen.”

Tonight is the continuation from episode 1, a helicopter is overhead and they drop a crate full of shrimp. Los Angeles is the shrimp capital of the world, in this individual challenge, each one will create a stunning fine dining dish using the most amazing shrimp. Today’s winning shrimp dish will go on tonight’s menu. There is more, the winner will receive a punishment pass which will get them out of any punishment should their team lose, but they can only use it once. Also, the winner will be able to choose someone from the winning team to replace them in the punishment. Gordon gives them thirty minutes.

Elliott is feeling good about the challenge, he feels he can’t lose it. Syann is going to make something true to her roots. Declan has worked with seafood, he says his dish is going to be a bang. Nikki is ambitious, she says she would rather go big or go home. Kenneth needs to turn this around, he had a one in the last challenge and that can’t happen again. Nikki is starting to feel frantic, the dish is not coming out as she planned.

Gordon says he is not tasting all of these dishes, he is going to rely on Christina and Jason. The sous chefs are ready to make their recommendations to Gordon. Gordon says he is doing something he has never done before, he is trimming the fat early. Gordon says he wants to taste the worst two dishes from each team. He is not carrying dead weight, the chef that has cooked the dish that he likes the least is going to be leaving Hells Kitchen.

Christina’s top three dishes are Amber, Lauren and Syann. Jason’s are Josh, Declan and Cody. Gordon tries the dishes. Amber is told to go back in the kitchen, and Cody, Declan, Lauren and Josh. Syann is the winner.

It is time for dinner service, Gordon has two VIP tables, one for Wayne Brady as his family, the other for Lisa Vanderpump, her husband and her dog. The red team serves a perfect risotto and Nikki adds raw lobster. Thankfully, Gordon catches it before it goes to a VIP. In the blue kitchen the men are working to get out their first appetizers of the evening. Declan did well on the scallops. Meanwhile, Nikki is trying to cook for redemption. The VIP tables are satisfied. Nikki can’t start crying and she doesn’t understand Gordon with his accent.

The blue team has a problem, the duck is overcooked by Peter. Gordon heads over to the red kitchen, they have a problem with meat done well. Then, over at the blue kitchen, they are starting to have problems. Wayne Brady watches as Elliott is given a hard time, and tells his daughter Maile Brady, that he wants to go over and give him a hug. There are more problems on the blue team, raw lamb. Gordon loses it, he throws the whole blue team out of the kitchen, it is an epic failure for all the chefs. Meanwhile, the women are starting to redeem themselves.

Gordon says both kitchens were disappointing, but the red team bounces back. He says Peter was a disaster on meat, Drew had raw lamb and Elliott stood out for doing nothing. The blue team have to come to a consensus on the two team mates that they don’t want on their team. Drew knows he messed up, but he didn’t stop trying and he doesn’t feel like he should be one of the two. Peter says he doesn’t know who they are putting up, but he is going nowhere.

Gordon asks for the first nominee, it is Drew. The second is Elliott. Elliott says he lost his focus and forgetting what goes with what, but he can do this. Drew says he had a bad service, but he can bounce back. Gordon asks Elliott if he is a better chef than Drew, he says no. Gordon tells him that he made his decision easy, take his jacket off and leave.