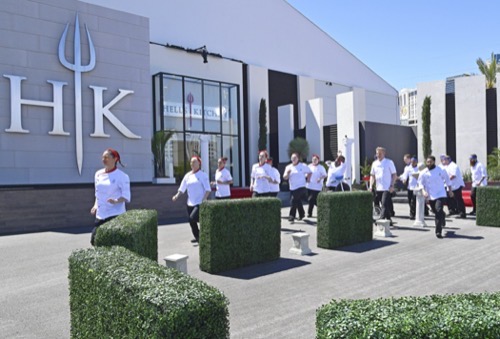 Tonight on FOX their Gordon Ramsay culinary competition series Hell’s Kitchen airs with an all-new Friday, January 21, 2021, season 19 episode 3 and we have your Hell’s Kitchen recap below. On tonight’s Hell’s Kitchen season 19 episode 3 episode called, “Hell Caesar!,” as per the FOX synopsis, “After watching a demonstration by Chef Ramsay, the chefs are tasked with perfectly re-creating his take on Caesar salad, which they then need to deliver to him on a scooter. Later, a scrambled dinner service leads to Chef Ramsay kicking a team out of the kitchen for the first time this season.

Drew is terrified, his best hasn’t even shined through yet. Marc is going to do what he can to get his team back on track. Marc is being intense, Declan thinks he has a Napoleon complex. Jason calls all the cooks to the front to see Gordon. He tells them that the challenge will be for them all to create a classic Caesar salad.

Gordon gives them a demo, goes through the steps in preparing a perfect classic Caesar salad. Jason and Christina arrive on scooters. Each team will have two similar scooters to deliver their Caesar salads to Gordon. Just like dinner service, they are never to bring anything to the pass unless it is perfect, and in this case, they must go two laps around a course before delivering the salad to Gordon.

Men are off to an early lead, but Drew drops his croutons and has to start over again. The women are catching up. In the end, the women come though, Syann delivers the last dish and they won. The women, for their win, are going on an epic excursion through the gorgeous Nevada desert, with the wind whipping through their hair on high-powered dune buggies.

While the red team is on their adventure, the men will prepare to serve Gordon’s Caesar salad with quail eggs and they are going to have to peel the eggs. Gordon warns that it is tedious work; the men are very upset.

Lauren is an adrenalin junkie, so she is really having a great time. Kori says it is a great reward, they can see the Vegas skyline from where they are driving. Meanwhile, the men are not having an easy time peeling the quail eggs, with Drew being the worst, he has only done two.

The drive back to Hells Kitchen doesn’t go well for Fabiola, she is freaking out and dizzy. A medic is with her and tells her that she is dehydrated and once her electrolytes go back up, she will start to feel better. Meanwhile, Kori thinks she is faking, she calls BS.

The teams are prepping for dinner service. Gordon tells the red team that they are serving Olympian speed skater, Apolo Ohno and the blue team are serving football running back Marshall Faulk.

It’s the second dinner service and the teams are amped up and ready to go. Gordon gives a timeout right from the start. The scallops are raw, Cody put the team off right from the start. The red team doesn’t do too well either, Fabiola undercooks the flat bread. On the blue team, Gordon asks for one order of scallops, Cody is doing two. Gordon is furious, he makes Cody read the order out loud and tells the men to get going. Gordon returns Fabiola’s flatbread again, this time it is burned. The women pick up for her and tell Gordon that they have it and they pool together.

Fabiola has completed her third attempt at flatbread, the red team is now catching up and delivering appetizers. Jordan is now getting overwhelmed, she is backing up the red kitchen. On the blue team, Gordon returns the salmon, it is raw. Lauren and Jordan are not pulling their weight and Gordon catches Mary Lou on the meat station trying to help out.

Kori is furious, the VIPs are staring at them like they are dumb. Gordon asked for a beef wellington, Jordan gives him a New York strip. Gordon loses it and says he is lost for words, the wrong protein and the duck he was given is raw. He tells the red team to leave the kitchen and go up to their dorm. Meanwhile, the men are hustling on their last order. Gordon tells them, terrible start, but a great finish.

In the dorm, the women must decide which women are going to go up for elimination. The majority choose Lauren as their first, and Nikki as their second.

Gordon calls the red team back to the kitchen. Their first nominee is Lauren because she didn’t communicate well with Jordan. The second one is Nikki, she did nothing wrong but they felt she couldn’t run a brigade. In fact, Nikki was better tonight than the night before. Gordon tells them that they have the wrong two up for elimination. He says Jordan and Fabiola are the reason the team went down tonight. In the end, Gordon decides to send Jordan back in line. Fabiola is sent home.