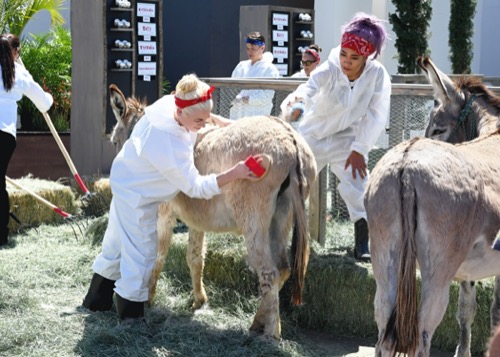 In order to get their ingredients, each team must corral live animals into pens to pick their proteins. Meanwhile, tensions rise on the blue team and one member walks out of the competition during dinner service.”

In tonight’s episode Cody and Marc get into an argument, Cody says all he did was pass the blame in the elimination. It’s a new day, a food truck is parked outside of Hells Kitchen. Gord says the latest craze is to take fine dining and serve it in a food truck. The next challenge, the cooks have to be creative with classic Mexican cooking. Each team will have to prepare four amazing dishes. A taco, a tostado, a chile relleno and an enchillado. Declan is a little worried, he doesn’t have any Mexican cooking experience.

Ramsey says in order to make true Mexican dishes, they need to have the freshest ingredients. There is a pen full of animals and eggs. The teams have to corral their protein into the corresponding pen for the dish they will be prepping. The team that finishes first, will get a five minute head start to start cooking. The red team has an early lead. Marc is hilariously running after a duck who is not willing to be moved from his current pen. The red team wins and gets their five minute head start.

Adam says his enchiladas are going to blow everyone away, but he can’t even handle the pans, he drops them on the floor. Marc is working on a duck and criticizes Amber for spending too much time on a salad. Time is running out, it is over. Gordon asks if the cooks are happy with their dishes, they say yes. Aaron Sanchez is the guest judge for this competition.

The blue team will have an amazing afternoon of pampering at it’s best. They are going to a spa at the Paris hotel. The ladies have to clean the donkeys and piglets, give them a pampered day. Scoop up all the manure, and move all the hay bails. Syann has a punishment pass and she decides to use it. She gets to choose someone to take her place in the punishment, she chooses Cody.

Amber can’t stand Marc, she says he is like a child and she just wants to shake him. Tensions are high on the blue team. Amber goes to see Marc and tells him not to talk to her. Syann says it is going to be an awkward spa day.

Cody is giving the piglets a massage and he actually is enjoying himself. Meanwhile Amber starts talking about service when the rest are trying to enjoy their massage at the spa, and everyone else is getting annoyed. The competition is starting to wear on Peter’s body, he is not liking the vibe on the blue team. Meanwhile, Declan is trying to help him, he wants to keep his head in the game and doesn’t want to lose another team mate.

Hells Kitchen is open and it is time for dinner service. Lauren starts by impressing with the flat bread for the red team. Meanwhile, on the blue team, Marc and Amber are working together, a disaster waiting to happen. And, Marc already has a problem communicating. Nikki is working solo on the meat station and she is a little worried. On the red team, Lauren is doing nothing and her team mates are noticing and so his Ramsay. Peter is having problems on the garnish station and Amber says the blue team is a hot mess.

Peter is embarrassed when Ramsay has to help him with his garnish. The blue team is called to the front and asks if anyone thinks they don’t have the qualities to be a head chef at Lake Tahoe and Peter says him. He is told to take off his jacket and get out. Everyone is shocked. Meanwhile, Peter says if this is what it takes to be a head chef then he can’t do it. He packs up his things and he leaves. Service continues.

The blue team is starting to hit their stride, both teams are on their last tickets.

After service, Ramsay says there is no losing team. But he wants both teams to go back and choose one cook that they are nominating. Lauren is chosen for the red team and Marc nominates Amber for the blue team and calls her toxic, she is always ready for an argument. Cody says he will not vote for Amber, he stuck between Josh and Marc. Adam would choose Marc as well. Marc says it is politics, Marc start getting argumentative and it looks like they are going to get into it. Cody tells Marc that he is super aggressive.

Time to face Ramsay, the res team says they think they will better without Lauren. The blue team chooses Marc, he refuses to take criticism. Lauren says her food is amazing, she just doesn’t have as much kitchen experience as the rest of her team, but she can learn. Marc clams he can take criticism, but his team can’t take it back. Ramsay says neither of them are leaving. He doesn’t feel that good sending anyone home. Everyone stepped up, became more vocal. He tells them to step up again and start owning this.