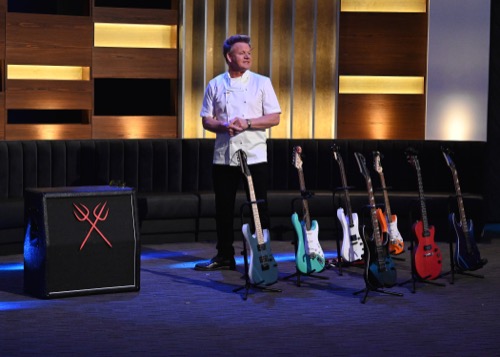 Later, the chefs get a surprise when Hell’s Kitchen hosts diners who will later be part of the audience at the Pen & Teller magic show.”

Gordon tells the teams that the next time he sees them they are going up a level. The next day, it’s Josh’s birthday and he tells the red team they have to throw it, he doesn’t feel like having a punishment on his birthday. Gordon calls and summons everyone to the dining room. In the dining room, Spandex Nation is performing and Gordon tells the cooks that today they are going to be modernizing classic Italian cuisine.

To help him judge these dishes are Jon Shook and Vinny Dotolo, they are chefs and owners of Animal.

The men are leading by five in the final round. The Chicken Parmesan gets the blue team three points and three points for the red team. The blue team wins. Their reward is very thrilling, they will be in a very powerful muscle car with a stunt driver drifting around the corners reaching speeds of 200 mph. Afterward, they will dine on Italian cuisine. The red team will have to make hand-made pasta from scratch, then blanch, seed, and score four cases of tomatoes, followed by making the most amazing pesto by hand.

Gordon gathers the teams before dinner service and Penn and Teller are there. Penn tells the teams to do a good job and get those diners over to their show afterward. It’s Italian night in Hell’s Kitchen. Two legendary restauranteurs are in Hells Kitchen tonight, Frank Pellegrino, JR, owner, Rao’s Restaurant Group, and Robert Earl, Owner Buca Di Beppo.

Amber is at the fish station tonight and she starts off by dropping a scallop on the floor and the lobster is raw. In the red kitchen, Jordan’s station has a huge fire that she has to get down. Jordan starts the scallops before speaking to the appetizer station and Gordon gets upset and throws them in the trash.

It’s forty minutes into dinner service and Gordon is already frustrated when Jordan walks out of the kitchen, takes a moment, and returns. Jordan redeems herself with new scallops. A flood of appetizers are leaving both kitchens and Gordon tells them to have the same momentum with the main dishes. Marc and Josh are all over the place in the blue kitchen and Josh’s potatoes are sent back because they are not seasoned. The blue team is finally managing to be on the same page. Syann and Mary-Lou are trying a personal approach on the meat station.

Gordon sends back the lamb on the red station, it is raw, Mary-Lou takes ownership for the mistake. The next one is nicely cooked and she tells Gordon she won’t let it happen again. On the blue team, Josh is scatterbrained and Gordon is getting frustrated. Gordon takes Amber to the backroom to talk to her because the salmon was overcooked, she starts crying. She is floundering like a fish out of water, he tells her she can do better than this, he tells her to give him her best. Amber recovers with the salmon.

Gordon says the good news is, both teams delivered but the winning team is the red team. Blue team has to go back to the dorm and come up with a consensus of which two should be put up for elimination. Declan says it should be Josh because he is like a deer in the headlines. Amber says Marc is weaker than Josh in the kitchen. Adam wants Marc gone too he lacks communication skills.

The blue team’s first nominee is Amber, their second is Josh. Amber says she is a very strong chef, she just let too many things get to her head tonight. Josh says he is a leader and a good chef. Gordon tells Josh that he saw no strength in him. Gordon tells Amber to get back in line. He tells Josh that he has been waiting since day one for him to use his voice and he cannot wait any longer, he is going home.