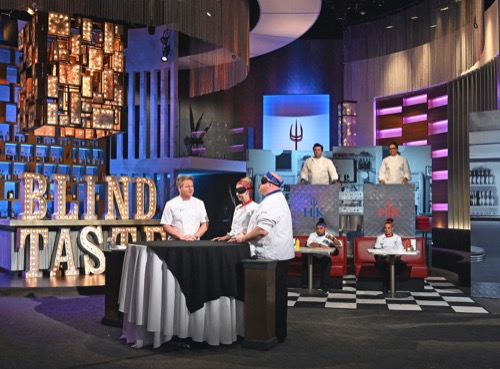 Tonight on FOX their Gordon Ramsay culinary competition series Hell’s Kitchen airs with an all-new Thursday, March 4, 2021, season 19 episode 9 and we have your Hell’s Kitchen recap below. On tonight’s Hell’s Kitchen season 19 episode 8 episode called, “Crapping Out In Hell,” as per the FOX synopsis, “It’s time for the iconic Blind Taste Test. The winners enjoy a helicopter ride, while punishment awaits the losers. Both teams struggle during service, but who will be sent home?”

In tonight’s Hell’s Kitchen episode, Jordan has been on the chopping block more than anyone else, but she is happy to be there. Meanwhile, Amber is crying, she can’t believe that Cody put her up instead of Adam and it is frustrating. Declan tells her to just focus on cooking. Adam is telling the rest he is top two for sure.

The next day, the cooks are all joking around and having fun, Declan puts on a blond wig and jokes around, makes everyone laugh.

Chef Ramsay calls everyone into the kitchen that has been transformed into a fifties-style diner. He has worked to prepare a treat for them all. Marino is bringing in some awesome-looking shakes. He asks them to figure out the flavors and only Nicole does it, she got peanut butter.

Today, the cooks are going to be doing the blind taste test. First, Nicole and Declan to taste, Marc and Jordan have to sit in booths. Nicole gets three wrong, Jordan gets ice cream and chocolate syrup dumped over her head. Nicole is wrong again, and it is maraschino cherries all over Jordan’s head. Declan got all four correct. The blue team is off to a big lead.

Kori and Adam are doing the tasting, while Declan and Nicole sit in the booth. At the end of that round, there are three points for the red team and one for the blue, Declan gets ice cream and chocolate sauce on him.

Kody and Jordan are tasting, with Amber and Mary Lou in the booth. The competition continues and Nicole has nothing on her yet, she sits in the booth. Kori guesses wrong and Nicole finally gets ice cream all over them. The blue team has won.

Gordon tells them to get ready for their grandest reward yet, they are about to take off on a helicopter tour through the majestic Grand Canyon. And then, they go to Caesars Palace to spend the evening in a fourteen thousand square foot private villa, the kitchen is closed tonight. Minutes from now, there will be a humongous beef delivery, the red team has to prep steak ahead of tomorrow night’s dinner.