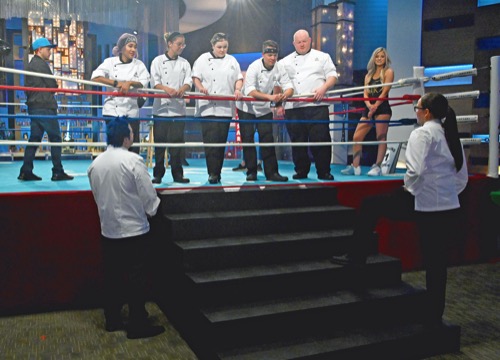 Tonight on FOX their Gordon Ramsay culinary competition series Hell’s Kitchen airs with an all-new Thursday, April 1, 2021, season 19 episode 13 and we have your Hell’s Kitchen recap below. On tonight’s Hell’s Kitchen season 19 episode 13 episode called, “It’s Time!,” as per the FOX synopsis, “The final five chefs compete in the “5 Dome Ingredient Challenge,” during which one protein and four supplements are revealed as they cook, and the team must decide amongst themselves who gets which ingredient as the challenge progresses.

Later, it’s time for the first Black Jacket dinner service, when all the chefs must cook together in the kitchen for the first time ”

In tonight’s Hell’s Kitchen episode, the episode begins with Mary Lou and Cody in the hot tub and she is flirting up a storm with him, tracing her finger over his tattoo – and Amber walks in and ruins the moment.

A black jacket main event is about to begin, the chefs are called to the kitchen where they find that the dining room has been transformed into a wrestling ring. Chef Gordon Ramsay is in the ring with the announcer. Gordon tells them that Mohammad Ali fought in the ring that is in the kitchen. The chefs will participate in a black jacket challenge. There are five rounds, in this fourteen-minute cook-off. When Bruce (the announcer) announces each round with the ring of the bell, they leave the kitchen, run up into the ring and there will be a dome with five new ingredients.

Whichever ingredients they end up with, by grabbing one item from the uncovered dome, they will have to incorporate it into one amazing dish. All the chefs seem happy so far with their ingredients, they are past the third round. Mary Lou gets feta cheese on the fourth round, she is discouraged, but quickly comes up with an idea. Time is up, they have done it. Gordon has brought in a true heavyweight to judge the dishes, the owner of Providence in Los Angeles, Michael Cimarusti. Gordon is going to call the chefs up one at a time.

Declan is up first, he made a chicken dish on mash potato and is told, “well done.” Amber made Yukon mash with a filet, she is told that the dish “lacked acid,” and Declan is still in the first place. Amber says she is ticked off 150%. Mary Lou made veal chop and is told “it is a refined dish executed at a high level,” she knocks out Declan. Cody made halibut with couscous and is told that “there is tons of flavor but the halibut is salty.” Kori is last, she made lobster with white wine and is told, “it delivers on flavor, overall it is an accomplished dish for forty minutes,” but she doesn’t win, Mary Lou is the winner.

She won the first black jacket and the first black jacket challenge. Gordon tells her that she is going to Dream Racing a gunning the engine of an incredible and luxury sports car. She will then satisfy that expensive taste with a gourmet lunch at Palm Las Vegas. Chef Christine and chef Jason will be joining her, she gets to pick their brains, they have been in the finals. Mary Lou gets to pick someone to go with her, she picks Kory and Cody is blown away, he thought she was going to pick him. Gordon tells Mary Lou there is a big box of surprises waiting for her in the dorm. Mary Lou got an All-Clad set.

Kody, Declan, and Amber are going to be miserable, it is recycling day in Hell’s Kitchen. Hundreds of pounds of garbage and it needs to go in the proper bins. Gordon thanks them for helping Hells Kitchen to help the planet.

Mary Lou has a blast driving a Porsche, she is laughing and smiling. Kori the same, the two women are having a blast. At Hells Kitchen, sorting out the trash is not fun. Declan is gagging, the maggots are gross. Declan is fed up with Amber, all she does is complain. Amber says it is a hard task and she is over it.

At lunch, Jason tells the women that communication is key with the men. He says it is a competition and they have a chance to be one of the best chefs in the world like Christina. Meanwhile, Amber says she has a weird feeling about the dinner service tonight and is really sad-faced. Declan and Kody are so annoyed with Amber. Mary Lou and Kori are back, it is time to open Hell’s Kitchen. It is the first time the chefs are cooking out of one kitchen.

The dining room is filled with some heavy hitters; Ember Moon, WWE Wrestler and Wade King, Animal Planets “Tanked.” Kori is worried about working with Declan and Cody, she hasn’t worked with them before. Declan serves the apps and they are ice cold. Amber is a little nervous that the scallops are not perfect, they need to push out apps fast, so she puts them up. Gordon sends them back, he says they are only cooked on one side.

Mary Lou is surprising in the kitchen, she has come out of her shell. Cody gets praise for his dish being properly cooked. Amber is in trouble again, she burned the salmon. Amber is starting to run behind, she is asking Mary Lou for help and Kori comes over because she is drowning. This is Amber’s time to shine and she is just drowning. Gordon turns around and sees four people on fish, he tells them to go and Amber to take control of her station.

Gordon tells Amber that if she is doing it, she needs to own it. Amber is making things very difficult. Kori steps in and takes over the fish. At the end of the day, the customer doesn’t care who does their fish, they just want it. Amber sends up a raw halibut and gets called out by Gordon, he tells her that she lost control, she needs not to give up, own it and take control.

The service is over, and Gordon says it wasn’t perfect. He wants the chefs to think of everything since day one, and pick two individuals that they want to put up for elimination. Kori wants to put up Cody, she says he lacks a voice. Amber chooses Declan, she says he is underwhelming. Mary Lou also wants to put Amber up. There is a unanimous vote, it is Declan and Amber.

The chefs are in front of Gordon, Kori says the first nominee is Declan and the second is Amber. Declan and Amber step forward. Gordon decides to send Amber home, she is out of the competition, he tells her she is not ready to run a brigade with the level of pressure it brings.