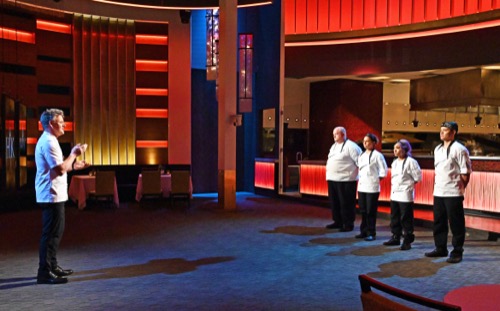 In tonight’s episode of Hell’s Kitchen, the episode begins with Gordon Ramsay telling the chefs that they have a one-in-four chance of being the new head chef at Hell’s Kitchen Lake Tahoe, it’s that close. The final four are Cody, Mary Lou, Declan, and Kori.

Declan says that Cody has been chasing Mary Lou like a dog in heat since they arrived at Hell’s Kitchen. Mary Lou admits that Cody makes her feel tingly.

At 6:50 am, the chefs are woken up and told to meet chef Ramsay in the kitchen. Once there, they find a full-blown club atmosphere at 7:00 am. Inside Gordon’s office, he tells them nobody parties like Las Vegas. The people they just passed to get to Gordon’s office just finished a long night at Dre’s club. They have worked up an amazing appetitive. Gordon wants the chefs to get creative with sophisticated comfort food. They have 60 minutes to prepare forty dishes. In the small plate challenge, chef Ramsay is testing the chef’s ability to create and assemble a dish that will appeal to Vegas club goers.

Mary Lou is making a salmon croquette, her grandma loved them and showed her how to make them. Cody is making a watermelon and heirloom tomato gazpacho and a skewer of Japanese fried chicken, Karaage. Kori is making fried chicken lollipops, Declan-made mini fish, and chips pastry.

The results are in, the chef’s whose dish was liked the least with only 15% of the votes is Mary Lou. In third place with 23% of the votes is Declan. It is between Cody and Kori. The winner of this challenge is Kori, well done. This incredible reward is spectacular and Gordon tells her to bring someone with her, she chooses Cody, the runner-up, rather than bringing Mary Lou who took Kori with her last time.

Today is a shopping spree at Macy’s, they will be able to spend a total of $4000, $2000 each. Once they get inside Macy’s, there is a second big prize waiting for them as well. Mary Lou says Kori doesn’t do anything accidentally. Gordon then tells the other two, Mary Lou and Declan, that the dorms need a spring cleaning; beds, fridges, bathrooms.

Cody is a big competitor, Kori’s plan is to keep a close eye on Cody and see where his head is at. On top of the $2000 each, they also get the entire collection of Hells Kitchen home and kitchen goods.

On their shopping spree, they buy a gift for Mary Lou and Declan.

Hell’s Kitchen is open and there is electricity in the air tonight as the dining room fills with hungry guests primed with an unforgettable meal prepared by the final four chefs. Tonight, the chefs will face their most crucial test yet, taking a turn at the pass. Christina will be sabotaging the chefs to test their attention to detail. The first chef to run the pass is Cody, he is nervous, but this is what he does.

In the first quality test, Christina has made the risotto with orzo rather than Arborio rice. Cody catches it and sends it back. In the next test, the fettuccine is changed with pappardelle, he catches that as well. His next test is in his hand, the order and he doesn’t catch it – there is duck on the ticket and they are not serving duck. Mary Lou thinks that Cody is lacking an authoritative voice.

Mary Lou is next, and she misses the first test on the wellington. The next one, Gordon ads beets to the garnish instead of carrots and Mary Lou catches it. Mary Lou has to tell Kori that her lamb is raw, Gordon steps in and tells Kori it is embarrassing.

Declan is next and he says he is going to dominate the pass and separate himself from the pass. Gordon has swapped braised fennel for braised endive, and Declan doesn’t catch it. Chef Christina has replaced the beef tartar with tuna, Declan catches it. In the final test, Declan catches and notices that the carbonara doesn’t have peas.

Kori is next, Gordon tells her that she is driving seat and she cannot afford to abandon the ship. She has her game face on, and she is ready. Chef Christina has changed the halibut for sea bass, she catches it. Cody services up wellingtons that are not cooked all the way. Finally, Cody serves up the wellington that is properly cooked.

The service is done, Gordon says it was a tough one. He tells them to go back to the dorm and decide which chef should be allowed to be beside them in the final.

Gordon says he has never had a situation like this, they the most competitive and articulate. The first chef not advancing in the competition is Cody.

The first chef moving on in the competition is Declan. It is down to Mary Lou and Kori, Gordon chooses both of them. It is a three-way battle. They have to face one more challenge to get to the final dinner service, where two will compete.