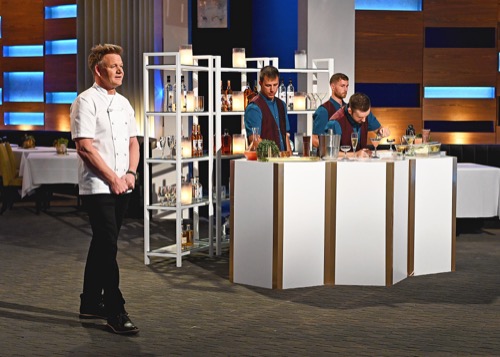 Tonight on FOX their Gordon Ramsay culinary competition series Hell’s Kitchen airs with an all-new Monday, June 7, 2021, season 20 episode 2 and we have your Hell’s Kitchen recap below. On tonight’s Hell’s Kitchen season 20 episode 2 episode called, “Young Guns: Temping The Meat,” as per the FOX synopsis, “Both teams are put to the test as they take on their first dinner service, preparing dinner for boxing legend Mike Tyson and NASCAR driver Kurt Busch, as HELL’S KITCHEN opens its doors for the 300th time.

In tonight’s Hell’s Kitchen episode, the youngest group of chefs to date. It was women vs the men and the women clinched the first victory. However, the second task is now. The two groups had to choose among nine different proteins and each chef has to use alcohol in their dish. The teams chose their proteins tonight. They were off to cooking and they only had forty-five minutes. Some of them chose to take risks. Emily is a vegetarian and she didn’t want people assuming she couldn’t cook meat and so she chose meat protein. The others chose to play it safe. The Alaskan chose to cook salmon because she would otherwise bring shame to Alaska if she didn’t know how to make that dish and still she managed to ruin it.

She undercooked her protein. It was revealed when Gordon Ramsay gave the two teams a chance to present their top three and they had to deliberate amongst themselves. The Blue Team chose Antonio, Steve, and Matthew. The first dish was heavily critiqued by Ramsay. He hated Antonio’s dish because the ceviche was chunks and so that was a horrible first impression from the Blue Team. They recovered some with their second dish. Steve’s dish was a pork chop. It was well-cooked and everything about the dish was tasty. The third dish however was from Matthew. Matthew was the guy who served Ramsay with the shrimp’s poop sack still on. Ramsay brought that up again when heard that Matthew’s dish had been chosen by his teammates.

Ramsay dreaded Matthew’s dish because of their first impression. He had been right to dread the new dish because Matthew had cooked chicken breast and it had been terrible. It had also been raw. Ramsay didn’t even taste the dish. He panned it automatically and so the only dish that was edible was Steve’s. He was in the running for the Punishment Pass. The Red Team had been smarter in their choices. They chose Victoria’s dish which was a shrimp dish. Ramsay had loved that dish. He also loved the second and third dishes. He ultimately chose Brynn as the winner of the Red Team. Brynn and Steve had so impressed the judges that he gave them both the Punishment Pass. He also told them that with great power comes responsibility.

The two winners of the challenge had to nominate the three worst dishes of their teams. Brynn nominated Emily, Keona, and Ava. Ava was the Alaskan. She somehow ruined salmon and so that was an embarrassment. But Steve nominated both Matthew and Antonio. He decided to play it smart and so the only person who Ramsay hadn’t panned was Alex. Alex’s dish wasn’t that bad. It was any worse than Matthew’s and that’s why Ramsay named Matthew and Ava as the worst of the worst. The worst dish meant the chef who cooked it will have to be eliminated. Both chefs fought for a second chance with Ramsay and Ramsay chose to eliminate Ava. He was giving Matthew a third chance because he sold it better than Ava.

Ava was eliminated. She thought it was unfair. She also thought it should have been Matthew who was eliminated and so she hated being eliminated first. Later, Antonio apologized to his team for his dish. He kept saying he was sorry and that he’ll bounce back. He also said what happened is over with. He basically annoyed people with all his talk and so it’s a good thing they had something to take their mind off of it. Both teams later received a set of knives. These knives weren’t cheap. They were quite expressive and they will last for years. The teams enjoyed their knives and they couldn’t wait for dinner service. They each got to cook for celebrities. The blue team had a false start as they started cooking entrees before they started making appetizers.

They got in trouble for that. They also got in trouble down the line when they eventually were supposed to start making entrees and they gave Ramsay a raw piece of meat. Matthew had tried to joke about it by calling it rare. He got taken to task by Ramsay and so the Blue Team messed up twice before the Red Team could have their first mistake and it was Matthew. Matthew cooked that rare dish that got them in trouble. His partner at the meat station got angry with him. He took control and yet he too wasn’t all that great on the station. He didn’t give the right timing on the station. He accidentally forgot one of the chickens on the VIP table and so he was made to apologize to Mike Tyson for his dinner running late.

The Blue Team was running late with every dish. Some had even been waiting an hour to be served their entrees and so Ramsay stepped in. Ramsay demanded the hold a team meeting in the storeroom. They went in there and they all said they would do better but it wasn’t a great first impression. They were running behind while the Red Team was serving dishes. Even after their meeting, the Blue Team couldn’t pull it together. They were all over the place with timing and cooking dishes on the same ticket together and so Ramsay had enough. He kicked them out of the kitchen. He automatically named them the losers of the challenge and he told them to nominate the two worst members of their team for elimination.

The Blue Team quickly looked at the meat station. Matthew and Payton were on meat and they were horrible. One of them snuck in a meat thermometer but then didn’t use it or use it properly. Ramsay was so angry that he thought they should nominate more than two people. He accepted Payton and Matthew’s nomination and he wanted a few more names up there as well. He thought Jay deserved to be there. He cooked the salmon and those were raw way too many times for his liking. Only Ramsay was only ever going to eliminate one person. He was tired of Matthew and Matthew was eliminated after he failed to recover from his third chance. And so the only members of the Blue Team were put on notice.

They had to recover or else they too will go the way of Matthew.