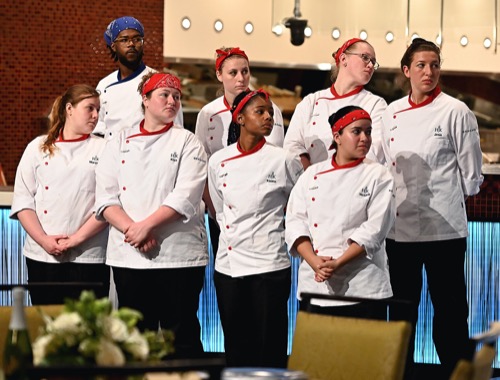 Later, one chef takes the fall during the use of a punishment pass, earning the respect of both teams, and dinner service leads some chefs to crack under the pressure”

The Blue Team’s dinner service had been abysmal. They lost their second week in a row and the Red Team was dominating. After their latest dinner service, they lost Jay. They also dealt with chicken-gate and so there was some fallout amongst the contestants. They were feeling down. Antonio was very depressed and he said it was going to be hard to get back his energy again.

Which wasn’t great seeing as they had a new challenge the next day. The Blue and Red Teams had to cook for their potential co-workers. They served brunch to the staff of Paris, Las Vegas the hotel. They were both serving the same thing and still the Blue Team struggled with service. They were serving brunch instead of dinner and again they ran into the same problems.

They ran into the same problems because again they put Alex on meat. He was the man who undercooked chicken the last time and still they put him back on meat. He was struggling with cook time. He was behind while everyone else was ready. He eventually got it together and that had been a miracle.

It was as they were on their final few dishes that the Blue Team once again self-sabotaged. They got behind and they lost the lead to the Red Team. The Red Team once again won the challenge. They won in mere seconds but they won it all the same and so they got their reward. They got a trip in helicopters.

They also got a staycation at Planet Hollywood in the mega mega suite. Steven was given the option of serving pastries as punishment or taking the reward and he decided to take the reward. Steven also had to decide who got to stay behind on the Red Team. Brynn chose to volunteer because she’s good with pastries and she also wanted to show Ramsay that she could step up in leadership.

Brynn volunteered to stay behind with the very fractured Blue Team. The Blue Team played the blame game after they lost the latest challenge and Antonio managed to tick off a few people because he goes around pretending he was great when he wasn’t. He made mistakes too. They all did and it was so frustrating because the few were bringing the many down. Trenton for one was depressed. Trenton has been doubted all his life. It even comes from his family and so Trenton didn’t want to fail at this. He made mistakes at brunch. He admits that and he wants to win at something. Only while he was burning pastries, Steven was coming out of his shell and he was enjoying himself at the hotel.

Steven was a whole new person. Winning at something had been great for him and so it must have sucked to have gone back to the Blue Team. Later, Hell’s Kitchen was opened early to accommodate the theater crowd. The Blue Team’s VIP was Penn and Teller. The Red Team’s VIP was Criss Angel. The Blue Team got off to a rough start with the fish station. Antonio tried to serve undercooked scallops and he got yelled at by Ramsay but the Red Team also had mistakes. Josie messed up the pizza. She was having problems and so Morgana stepped in to help her. Morgana was familiar with making pizzas. She was an old hand at it and she really did try to help Josie. It was Josie that kept messing up.

Josie even dropped a pizza. The Red Team was also dealing with Brynn. Brynn has become quite vocal lately because again she wanted to show Ramsay that she could lead and instead she was making mistakes in the kitchen. She was yelling out the wrong orders. She was also annoying people. The Blue Team wasn’t doing well either because they had Alex. Alex was on garnish. He was also supposed to be reading out the orders and he kept messing up because he felt frustrated with the kitchen. Ramsay sent him outside for a few people to get his head right. He came back and garnish improved. It improved because of Steven. Steven helped take charge and he like Sam was doing their best to cover for the failures of their team.

Antonio was one of those failures. He kept messing up at the fish station and the other team tried to get someone to check up on him but sadly they asked Alex to do it and Alex thought a raw fish was cooked. Only the Red Team was surprisingly committing errors as well. Victoria was the one letting down the team with her fish station and her problem was that she was so quiet. She didn’t tell anyone when she was ready. She just delivered the fish and got the whole team in trouble. Ramsay even had to take the Red Team out back to tell them off and that has never happened before with them. It happened to the Blue Team. Not the Red Team. Ramsay had to take the Blue Team outback after they served the raw fish and so that was normal. That was the pattern of what usually happened every night.

Both teams finished their service. The Blue Team finished their service for their first time and still that didn’t stop Ramsay from asking them to nominate two people. He also asked for the same from the Red Team. Both teams had to nominate two people. The Blue Team nominated Antonio and Alex. The Red Team also nominated Josie and Brynn. But Ramsay disagreed with the Red Team nomination. He asked Brynn to step back in line and he called up Victoria. And in the end, two people were punished.

Alex was eliminated tonight and Victoria was sent to the Blue Team.

Ramsay was desperate and so he put an end to the battle of the sexes by mixing up both teams.