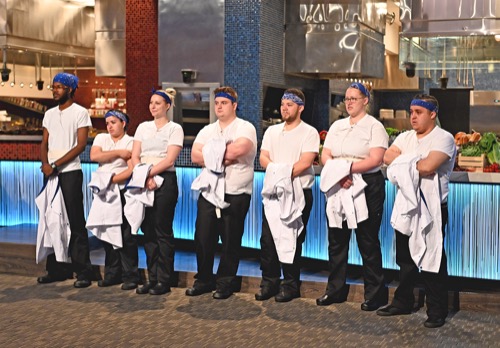 Later, one chef takes the fall during the use of a punishment pass, earning the respect of both teams, and dinner service leads some chefs to crack under the pressure”

In tonight’s Hell’s Kitchen episode, Ramsay needed to see a change in the kitchen. The Red Team was dominating and so Ramsay changed everything. He took members from both teams and he exchanged them. Some members of the Blue Team joined the Red Team. Some members of the Red Team joined the Blue Team. The battle of the sexes was over and now Ramsay wanted to see what the true problems were in the kitchen. But not everyone was happy with his decision.

One of the guys who joined the Red Team wasn’t happy because he felt he was just getting his legs on the Blue Team and now he’s suffered a setback because of the exchange. And Ramsay meanwhile was hoping the exchange would create a stronger sense of communication.

Communication is the name for the next challenge. Ramsay handed out special jackets that had emojis on the back of them and other team members had to help their friends understand what they were cooking. The guessing game from the emojis was difficult. Not everyone understood what the emojis read out because they didn’t really get emojis and there were also other people that didn’t stick to the recipes. They added their own spin to things.

They also got in trouble for it because someone added mayonnaise to their tartar sauce and Ramsay was furious. He demanded to know who changed his recipe. He was the celebrated chef around here. He had Michelin stars and so he was angry that anyone dared to believe they knew better than him.

The Blue Team however had to clean the hotel and they had to wear a French maid outfit while they were doing it as well. The new members of the Red Team were glad they got to skip the punishment. They were also glad to finally get to enjoy themselves.

Then came dinner service. Everyone was on edge about the dinner service because they knew they were going to be cooking with a whole new team and once again the Blue Team was the first to make a bad impression. Two chefs were serving table side and Antonio was chosen as the representative of the Blue Team. There was just one problem with that. He was sweating like crazy and Ramsay had to remind him to wipe his face.

Only the Blue Team was able to recover from that embarrassment. It was the Red Team that easily fell down and they didn’t weren’t able to get back up again. The reason for this was Payton. Payton was the garnish. The easiest station at dinner service and still he struggled because he thought it would be easy and he, therefore, stopped paying attention.

Payton was such a mess on garnish that eventually a member of his own team accused him of not knowing the menu. Payton didn’t which garnish went with which dish and he couldn’t get it together. It was Brynn who made the accusation. Payton thought she didn’t like him. He then went about trying to prove she was wrong and to show her that he could be a great member of the team. The Blue Team was doing beautifully. They were delivering dishes like never before and their team was well-operated. They had no problems on their team. It was the Red Team that was falling apart. If it wasn’t Payton, it was Morgana. She failed to communicate and her station was falling apart as well. It got so bad that Ramsay made the Red Team eat their mistakes.

It was the mindset that was the issue. The Blue Team was remaining calm while Morgana lost confidence in herself and her cooking. She basically gave up and it showed. Her dishes were constantly raw. The Red Team wasn’t delivering entrees because of her and they were soon kicked out of the kitchen. Ramsay also demanded that they come up with three names for elimination. The newly formed Blue Team on the other hand finished the dinner service and they won the dinner service. They showed that they can be great. They just needed the change and so it turns change was horrible for the Red Team. The Red Team had no problem nominating Morgana and Payton for elimination. It was the third person they struggled with. They didn’t know who to nominate for the third position.

They ultimately went with Keona for the third choice. Ramsay disagreed with this decision and so he didn’t even call Keona down. He told her to stay where she was while he called down Morgana and Payton. Payton tried to claim he lost his voice when he switched teams. Morgana tried to claim that she would speak up after this and that was too late for Ramsay. Ramsay eliminated Morgana. Payton was given a word of warning and now he has to go back to the Red Team who was pretty ticked off with him.