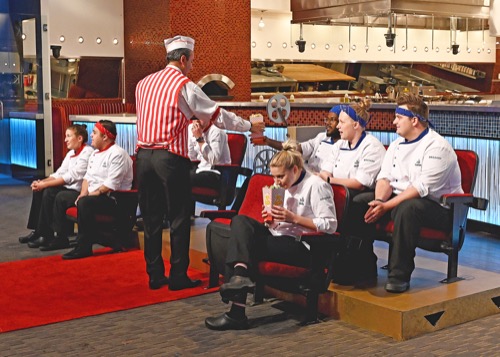 Tonight on FOX their Gordon Ramsay culinary competition series Hell’s Kitchen airs with an all-new Monday, August 16, 2021, season 20 episode 10 and we have your Hell’s Kitchen recap below. On tonight’s Hell’s Kitchen season 20 episode 10 episode called, “More Than A Sticky Situation,” as per the FOX synopsis, “The chefs take on the classic HELL’S KITCHEN Blind Taste Test challenge with messy consequences. Later, the strategic use of a punishment pass makes one team come unglued during dinner service, and both sides must pull it together.”

In tonight’s Hell’s Kitchen episode, the Red Team is in a weird place right now. They all agree that Josie messed up and so that’s why they nominated her to be eliminated but she wasn’t eliminated. She managed to fight for her position. She also blamed Brynn for her mistakes. Brynn said there’s no drama and that she doesn’t hold what Josie said and did against her.

Only there’s still drama. Josie feels like the whole team is against her and so she hides from them rather than speak with them to finally end all the tension. Antonio tried to be the peacemaker only it was hard because no one wanted to talk. They just wanted to continue ignoring the situation and that’s exactly what they did. They ignored it. They went into their next challenge still at odds with each other.

The next challenge was the Blind Taste Test Challenge. Chef Ramsay brings it back every year to see if the contestants truly knew their ingredients and every year there’s a bunch of stuff dumped on their teammates whenever they get it wrong. Up first was Antonio and Steve. They both got one right out of three and so their teammates were drenched in nacho cheese and caramel sauce.

The next team was Kiya and Trenton. They both got one right out of three and so it was a repeat of before. There was caramel sauce, popcorn, nacho cheese, and lastly nacho chips. But the next team did a little better. Megan and Brynn both did well and Megan’s teammate didn’t get drenched in anything at all.

Josie went against Emily though for some reason Josie kept getting things wrong. Brynn got drenched and many are believing Josie might have set her up. In the end, the Red Team lost. The Blue Team getting points and they eventually won the challenge. Their reward is a party bus. Brynn decided to play her Punishment Pass and she made Steve stay behind. Which he wasn’t mad about.

He had a thing for her and she wasn’t afraid to use it. Steve stayed behind to help clean up the dining room. He worked with the Red Team and he had to listen to Sam as he complained. He also complained about himself because they had to pick up caramel popcorn by hand. They weren’t allowed to use a vacuum-like any sane person would use.

Steve is a pretty positive person but even that had him swearing. He hated cleaning by hand. He hated the punishment and so he did get mad he couldn’t go on the bowling with everyone else. He loves bowling. Brynn knew he loved bowling and that’s one of the

reasons she chose him to stay behind. Brynn went bowling. She talked smack about Josie to the Blue Team. They played on that because they wanted to create division and Trenton for one loved turning Brynn against a member of her team. He said it would better their chances of winning. Later on, the real challenge came. They had dinner service and they had to deliver perfect dishes to each and every table in order to win.

The Red Team wasn’t cohesive. Although, they got lucky at first because Steve was in a bad mood. Steve was on the Blue Team and he kept messing up for a while because he was in such a bad mood from the punishment. He recovered a little then he had a setback. He was all over the place and so Ramsay got frustrated with him. Ramsay pulled him aside.

He told Steve to get his act together or else he could leave now and so Steve promised to get it together. Ramsay didn’t do the same for the Red Team because he already knew they would be nominating Josie and that she deserved to go. Josie was all over the place. She should have been proving she deserved to stay tonight and instead she couldn’t deliver.

Josie didn’t cook enough protein at her station. She would forget parts of the order and so Ramsay knew what was going to happen to her and he didn’t care. He let her made the mistake while he personally spoke with Steve to get Steve back in the right frame of mind. Ramsay also spotted two leaders in the kitchen. He said Megan and Kiya both stood out as leaders.

He, therefore, named them as the leaders of the kitchen and he told them to have brutal discussions with their team as they each name one person to be put up for elimination. Blue Team had a hard choice. Steve is usually one of the best people on their team and tonight he just wasn’t at his best. Emily on the other hand is painfully young even for them and so she might be put up.

The Red Team had a clear choice. Kiya didn’t beat around the bush as she named Josie because Josie was all over the place and rightfully deserved to be eliminated after what she did. Josie tried to come up with excuses. She claimed she didn’t know garnish was supposed to be ready first and yet she didn’t vocalize herself in the kitchen. She never said she wasn’t ready. She just messed up and did it in silence. Her excuses were also weak and Kiya said as much. Josie was nominated and so was Steve. Steve spoke with passion. Ramsay chose to him and eliminate Josie. It was her last night in the kitchen.