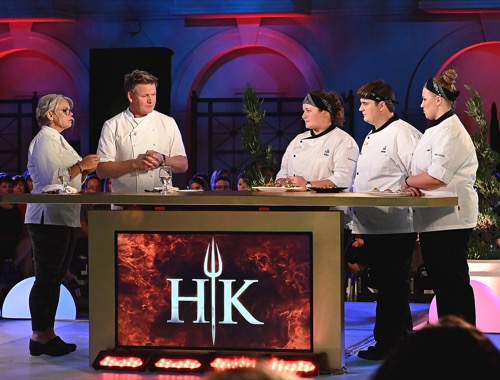 In tonight’s episode, the episode begins with the final three enjoying the moment and heading back to the dorm. Megan is in disbelief, she never thought she would get this far. Trenton says it feels good to be top three, he always knew he would make it there. Kiya is thrilled. Gordon calls them back and tells them that they have one more challenge. Each of the chefs will have to design a stunning menu featuring one cold amazing appetizer, a delicious hot appetizer, and three entrees which include one seafood, one red meat, and one surf and turf.

Gordon gives them all a binder and he tells them that he has pulled in a favor, season 17 winner chef Michelle will assist as a sous chef because they only have two. The sous chefs are randomly placed throughout the house so it is anyone’s guess who the chefs get. Trenton got Michelle, Kiya got Jason and Megan got Christina. The first task is for the chefs to prepare a menu with their sous chefs. After long meetings and a short sleep, the chefs have one on one breakfast meetings with Chef Gordon at Nobu.

Megan is the first to have her early morning, she tells him that she feels grateful to have Christine. She rolls off a few of her dishes from her menu. Gordon gives her a menu for breakfast and little does she know, her parents handed her the menu. Gordon tells them that Megan is passionate and a hard worker, the real deal. He has arranged for some private place for Megan and her parents to spend some private time. Kiya is next and her mom and sister are in front of her.

Kiya says she definitely needed this. Gordon tells them that Kiya is one of the most improved. Last is Trenton, and his father and girlfriend are there. Gordon tells them that Trenton has lit up Hell’s Kitchen this year. Trenton hugs Gordon and thanks to him. After some private time with their families, Gordon announces that he is doing something that he has never done before in Vegas. They are going to get the most amazing wardrobe, hair, and makeup to make sure the three look their best when they paint the town red.

The cooks go in a helicopter with Gordon and he tells them that they are not going on a night out, it is their last final challenge for the threesome with their sous chefs. As they prepare the items that they listed in their menus, their families and friends cheer them on. Two of the chefs will make it to the finale of Hells Kitchen. Their dishes will be judged on a level of 1 to 10. Judging the cold appetizer is Ming Tsai from Blue Dragon in Boston, MA. Megan 9, Trenton 10, Kiya 10, and he says he is very impressed with all three of them.

Next is Jennifer Jasinski from Bistro Vendome in Denver, CO, and she will be judging the warm appetizer. Kiya 9, Trenton 9, Megan 8. Emily is scared for Megan because of that lower score. Judging the seafood round is Aaron Sanchez from Johnny Sanchez in New Orleans, LA. Trenton 10, Kiya 8, Megan 9. Judging the red meat dishes is Roy Yamaguchi from Roy’s in Honolulu, HI. Kiya 8, Trenton 10, Megan 8. It is down to the last dish, the surf, and turf, Aaron Franklin from Franklin Barbecue in Austin, TX. Trenton is 9 and he is in the finale. Megan 10, Kiya 8. Megan is the second winner going to the finale.