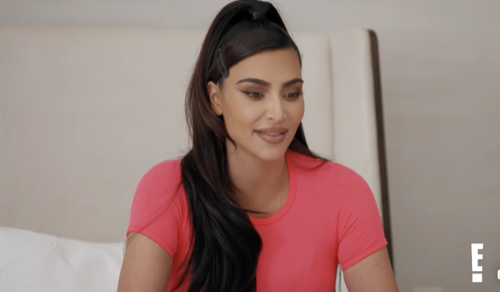 Tonight E!’s most-watched series Keeping Up With The Kardashians (KUWTK) returns with an all-new Thursday, May 13, 2021, season 20 episode 8 and we have your KUWTK recap below. On tonight’s KUWTK season 20 episode 8 called, “Season Of Change,” as per the E! synopsis, “Khloè runs into some unexpected obstacles while exploring surrogacy. Scott worries that the family will drift apart now that the show is coming to an end. Kim is determined to figure out who is behind the satirical social media page NorisBlackBook.”

In tonight’s Keeping Up With The Kardashian episode, the sisters met up with their momager, Kris. They were supposed to discuss the next phase of their careers and instead they ended up talking about Instagram. There was an account on Instagram called “norisblackbook”. It was an account based on what this person believes North West is and how she acts and they were so spot on that everyone in the family thought it was an insider.

They believe it was either their cousin Cici or a family friend. The account could also be run by a super fan. The women, therefore, suspected the account might be discontinued after their show comes off the air and so they all wanted to find who was running the account before it disappeared. They were investigating it.

Other than this, the women were pretty chill about the end of their show. They said they needed time to regroup and so the only one that was worried was Scott. Scott had been dating Kourtney for about a year when the show started. He doesn’t remember a time before then and so he was worried because a guy like Scott doesn’t like change.

The pandemic had been hard enough for him. Scott struggled once filming stopped because he didn’t feel as close to the family as he did before and that made him even more worried. Scott didn’t know what would happen once the show ended. He didn’t know if the sisters would touch base with each other as much as they did during filming and so this next phase in the Kardashian saga had Scott acting panicky.

The sisters weren’t all that worried. They believed they would still be a major part of each other’s lives and they were helping each other even now. Khloe wanted another baby. She was advised by her doctor not to have the baby herself because she would be considered a high-risk pregnancy and so she was turning to surrogacy. Khloe had thought she was prepared for the surrogacy route because her sister Kim used a surrogate.

Only their experiences differed. Kim chose her surrogate fairly quickly and they were on with the show while Khloe had different parameters. Khloe believes that how a mother acts during her pregnancy will help her child and so she was looking for a certain person.

Khloe was very calm during her pregnancy with her daughter. She firmly believes that’s why her daughter is so chilled and so she wants that with her second child as well. However, it was hard on her that she couldn’t control everything. She looked at surrogates with Tristan and they ruled out people who listened to rock music or techno because they suspected those people might have taken drugs in the past.

Khloe was also struggling with how it was the surrogate’s body and her choice. The surrogate gets to decide if she wants to terminate a pregnancy for her health. Khloe hadn’t known they had that power and so she was struggling with accepting that. Khloe and Tristan had needed time to think about things and they went to her mother’s house in Palm Springs.

Kris’s other house was their oasis. The family usually escapes there to take a break from the world and that’s where Khloe went with Tristan to consider whether or not surrogacy is the right fit for them. Meanwhile, Scott was finding new ways to see the sisters. He said he said he needed a way to see them after filming ended and so he tried working out with Khloe and Tristan and it was too brutal for him. He next helped Kim study.

She was studying to become a lawyer and that required less physically demanding exercises than the other thing and so he was happy to help. Scott struggles with change because the changes he’s had in his life have rarely been positive. The sisters understood that and that’s why they didn’t mind how different he was acting.

Khloe is someone who would love twins because she would think that’s a part of God’s plan but the surrogate might terminate the second twin if she just wants to carry one baby. Khloe didn’t like the idea of that. She hated losing that much control and neither she nor Tristan liked the fact that someone else gets to make a decision about their baby. Khloe said it’s like giving a child to a stranger and expecting to have that child returned in a year. And so her experience with surrogacy was vastly different from how easy Kim found it.

Kim found a surrogate fairly week. Her surrogate was then pregnant within two weeks and so Kim got two of her children very fast considering the whole progress. Then again Khloe and Kim are different people. It went faster for Kim because she didn’t have the same control issues and so Khloe needed to consider if surrogacy was right for her.

Her mother would do it for her but she was turning sixty-five and she didn’t want to be that age as well as pregnant and so Khloe would have to choose a stranger. The family all came together at Kris’s house. Scott showed up as well and the family did their best to reassure him. They told him he’ll always be a part of their lives. Kris called him her son and she told him she would cook for him whenever he needed. And even if the show, he will never be alone.

Khloe and Kim later met with “norisblackbook”. She was a super fan of theirs and they both told her how witty and spot-on her imitation was. They even introduced the super fan to North. They also took photos together and they all just had fun chatting.