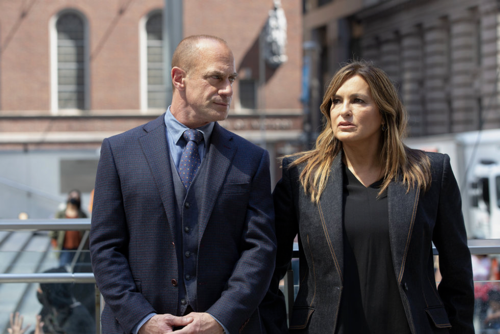 Morales and Washburn keep close tabs on their star witness; Bell and Stabler must cope with a sudden development in the case.”

In tonight’s Law & Order Organized Crime finale episode, in court, Stabler passes by Wheatly who rolls his eyes at him. Wheatly and his children, along with all the charges, Richard is being charged with second-degree for the murder of Manfredi Sinatra and the murder of Kathleen Marie Stabler. Wheatly asks the judge if she wants to throw anything else in there, he says they are being targeted because they are black. In light of the charges, the people request that they all be reprimanded without bail.

Outside the courthouse, Richard’s lawyer tells the press that he is the victim and his children will not be testifying against him. Stabler walks out and just says no comment.

Angela is sitting in a room, Ellsworth goes to see her and she tells him she is worried that Richard is going to get to her. She asks him if he found out anything about that woman, he says he thinks her ex was referring to Olivia Benson.

Richard tells his lawyer not to worry about Angela, he will take care of her. She tells him that a case like this might take a year before it gets to court. If he is going to play his card, now is the time.

Back at the station, Stabler tells the team that Richard doesn’t want a Federal trial, he wants a get out of jail free car feds, he is going to try and make a deal with Baldi. Probably offered him a personal guided tour of the dark side of the web. And tomorrow, Richard has an appointment with Baldi.

Stabler, Fraser, and Bell interrupt Vince Baldi’s lunch. They tell him that Richard is a ruthless criminal who doesn’t deserve a break. Stabler tells Baldi that Richard murdered his wife. Baldi says he wants justice, it’s just a meeting.

Stabler is upset, he calls Bell, she drops by to see him. He says he is working on coping strategies with a PTSD specialist. He thanks her for coming by. He says he doesn’t know what to do. She says they can do nothing and just be.

In prison, Ritchie is nervous when two guys keep staring at him. He tries to walk over to some guys for protection. He says he knows something about someone on the outside, someone they work for. Congressman Leon, one of the men comes up to him and tells him to shut his mouth.

Ellsworth comes back to see Angela.

Angela is in the bathroom, she is crying when she hears some voices. All of a sudden, Angela hits the floor, she has foam coming out of her mouth, which looks like a possible poisoning. Ellsworth is with her and lifts her head so she doesn’t choke on the foam.

Stabler is in therapy, he says he is still working. EMS was quick, Angela is lucky to be alive, she is stabilized. Freddy says that he went to the store and picked up some items on the curbside for Angela, bath products. Turns out it is Freddy’s fault that Angela was almost killed.

Richard is reading a magazine when Bell and Stabler drop by his cell to see him. Stabler and Bell see Richard being transferred from the prison for his meeting, they follow the convoy, not trusting that Richard could be up to something.

From prison, Hugo calls Mr. Taylor and tells him that “they are on the move.”

All of a sudden, Richard’s car is attacked in Chinatown. Stabler and Bell manage to shoot a guy and save Richard. They try to get away and Richard is shot in the leg. Bell calls for backup.

Meanwhile, more guys are coming in with guns, Richard says they are not his men, he has no idea who they are. The police arrive, more bullets are fired. Richard, Bell, and Stabler get out ok. Bell gets a phone call, she and Stabler have to ride with Richard in the ambulance and deliver him to the US attorney’s office, high ups orders.

Stabler asks Bald not to use his wife’s murder as a bargaining chip with Richard. Later, Richard walks out of the FBI and says it was a minor set back but he is not concerned. Bell tells him that they are going to make the murder charges stick and he is never going to see the light of day. Before Richard gets transported, he tells Stabler that he hopes Angela is ok, he heard she had a little tummy ache.

Richard is back in his cell, he looks under his mattress and finds his cell phone. He calls his wife, tells her that he needs her to do something, he will talk her through it. He tells her that he is going to dictate a message to her and he wants her to write it exactly as he says, “All, I’m In Trouble. Can You Please Come to Meet Me?”

Stabler and Bell o to see Susan Johnson, while Benson is at Briarwood, she sees one of Stabler’s men dressed as an orderly. She calls Stabler and tells him, then she hears some noise, she goes into one of the rooms and finds a man laying on the floor. Stabler and Bell arrive at the hospital, Morales is there, he has a gun, he says he should not have taken the call that day.

Bell asks how much he paid him, he says 2 million, but he got his sister, he takes care of her, she idolizes him. He wants his job back. He has a gun to his head, he lowers it and goes to shoot Bell, she shoots him self-defense. They go into the room and Angela is there, she has a needle in her arm. Stabler goes out in the hall and shouts that he needs help.