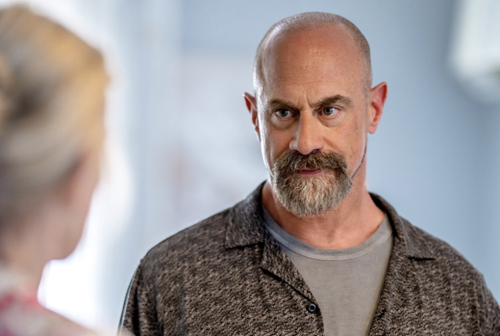 Sgt. Bell (Danielle Moné Truitt) is forced to work with a rival colleague when their investigations collide.”

In tonight’s Law & Order Organized Crime episode, Richard Wheatley got off. He turned in state’s evidence and he was released without any charges. He was so smug about it. He smiled at his wife and even at the prosecutor. But there was one thing missing. It was Detective Elliott Stabler. Wheatly had Stabler’s wife murdered and so one would think that Stabler would at least show up at the hearing however he was off working.

He was involved in an undercover assignment. He had to play a bad guy. He doesn’t get a day off or show his face on camera where he’s publicly identified as a cop and that’s what would happen if he showed at court. The Wheatly case received public attention. They would have highlighted Stabler if he or his family went to the courtroom and so they didn’t go.

They sat it out while Wheatley got scot-free. Stabler was undercover in the Kosta Organization. It was an Albanian crime family and he was known as Eddie. “Eddie” was supposed to oversee a shipment coming in, but there was a hiccup. The harbor cops that they bribed had stayed away and several cops showed up in their places. There was a leak somewhere.

It wasn’t with Eddie because Stabler’s people didn’t want to move in until they knew for sure that the drugs were going to be there and so someone else tipped off the cops. Stabler got arrested along with several others. His Sergeant visited him in a room without cameras. She asked him what went wrong and he told her that the harbor cops were rogue officers.

Sergeant Ayanna Bell agreed to look into it. The arrest of her undercover officer had made her look bad as she answered for it to her bosses and it doesn’t help that Stabler hasn’t gotten much information while her former superior officer Sergeant Brewster was getting intel from his. Bell checked in with Stabler. Stabler told her about Eddie’s dealings.

Eddie was working for a man named Reggie and Reggie’s uncle was the head of the organization. The uncle was upset with Reggie. This was Reggie’s big opportunity to prove his worth and it ended in disaster. Reggie has to make it up to his uncle. He asked Eddie to help him and Eddie gave his word of honor that they would find out who sold them out to the harbor police.

In truth, Stabler had Bell look into it. Bell and her tech person found the rogue officer. It was Harbor Patrol Officer Beau Campbell. He was paid money to steal drugs from the Albanians and that’s why Reggie’s people were released. They were released because no drugs were supposedly found on them. But that’s only because it was stolen by the harbor police.

Stabler acting as Eddie “interrogated” a cop he held at gunpoint and that had been a plant. Something he arranged with Bell. They got an officer to drop Campbell’s name in Reggie’s hearing and that allowed the men to go after Campbell. They beat up the dirty officer. He told them that a black nicknamed Red Bull had paid him a hundred and fifty grand to rip off the Albanians.

Red Bull was somewhere between twenty-five and thirty. He also has a gold tooth. Stabler told Bell the description and she identified the guy. Red Bull was running with a gang named Marcy Killers. They used to be low-level drug dealers and now they’re branching out. Stabler acting as Eddie was able to steal a gram of coke from one of the Marcy Killers.

Reggie had been with him and Reggie gave the sample to his uncle. Stable doesn’t know what happened because it was insiders only but the Kostas is going to war with the Marcy Killers and the Marcy Killers know it after being held up like that. Red Bull spilled the tea. He told his crew about going rogue and stealing drugs from the Kostas.

The man in charge of the Marcy Killer is a businessman by the name of Mr. Webb. Webb is trying to work with congressmen and look on the up and up and one of his own men was risking that now. It was going to be a gang war. Bell was warned and she brought it to her boss. She believes they should move in to avert the war so that there were no civilian casualties.

Sergeant Brewster however was for the war. He thought the two gangs would take out each other and that they would save the taxpayer the trouble of trials. Brewster and Bell both made their cases and their direct boss decided to merge their investigation. They would be co-commanders into the war on drugs. Only they couldn’t move on either gang until the first attempted murder happened and the murders didn’t happen.

At least not then, anyway. Reggie’s uncle got his orders from the real man in charge of Kostas’ organization and the Kosta was in contact with Mr. Webb. The drugs were returned. Webb and Kosta also entered into a mutual agreement to work together. They were going to pull their resources into dominating the trade on cocaine. Stabler even got to witness some of the transactions. He tried to fade into the background, but Kosta saw him and he told his lieutenants that he’s not sure if he trusts him. And without his trust, Stabler won’t get any intel and he could also be murdered for knowing too much as it is.